Ionizing radiation is any radiation (particles or electromagnetic waves) that carries enough energy to knock electrons from atoms or molecules, thereby ionizing them. For ionizing radiation, the kinetic energy of particles (photons, electrons, etc.) is sufficient and the particle can ionize (to form ion by losing electrons) target atoms to form ions.

The boundary between ionizing and non-ionizing radiation is not sharply defined, since different molecules and atoms ionize at different energies. This is typical for electromagnetic waves. Among electromagnetic waves belong, in order of increasing frequency (energy) and decreasing wavelength: radio waves, microwaves, infrared radiation, visible light, ultraviolet radiation, X-rays and gamma rays. Gamma rays, X-rays, and the higher ultraviolet part of the spectrum are ionizing, whereas the lower ultraviolet, visible light (including laser light), infrared, microwaves, and radio waves are considered non-ionizing radiation.

All biological damage effects begin with the consequence of radiation interactions with the atoms forming the cells. All living things are composed of one or more cells. Every part of your body consists of cells or was built by them. Although we tend to think of biological effects in terms of the effect of radiation on living cells, in actuality, ionizing radiation, by definition, interacts only with atoms by a process called ionization.

As was written, each type of radiation interacts with matter in a different way. For example charged particles with high energies can directly ionize atoms. Alpha particles are fairly massive and carry a double positive charge, so they tend to travel only a short distance and do not penetrate very far into tissue if at all. However alpha particles will deposit their energy over a smaller volume (possibly only a few cells if they enter a body) and cause more damage to those few cells.

It would certainly simplify matters if biological effects of radiation were directly proportional to the absorbed dose. Unfortunately, biological effects depend also on the way in which the absorbed dose is distributed along the path of the radiation. Studies have shown that alpha and neutron radiation cause greater biological damage for a given energy deposition per kg of tissue than gamma radiation does. It was discovered, biological effects of any radiation increases with the linear energy transfer (LET). In short, the biological damage from high-LET radiation (alpha particles, protons or neutrons) is much greater than that from low-LET radiation (gamma rays). This is because the living tissue can more easily repair damage from radiation that is spread over a large area than that which is concentrated in a small area. Of course, at very high levels of exposure gamma rays can still cause a great deal of damage to tissues.

The radiation weighting factor is a dimensionless factor used to determine the equivalent dose from the absorbed dose averaged over a tissue or organ and is based on the type of radiation absorbed. The resulting weighted dose was designated as the organ- or tissue equivalent dose: 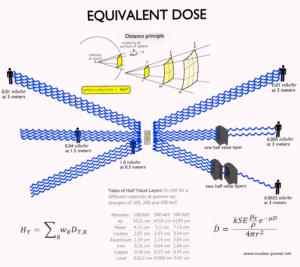 Ionization energy, also called ionization potential, is the energy necessary to remove an electron from the neutral atom.

A nitrogen atom, for example, requires the following ionization energy to remove the outermost electron.

There is an ionization energy for each successive electron removed. The electrons that circle the nucleus move in fairly well-defined orbits. Some of these electrons are more tightly bound in the atom than others. For example, only 7.38 eV is required to remove the outermost electron from a lead atom, while 88,000 eV is required to remove the innermost electron. Helps to understand reactivity of elements (especially metals, which lose electrons).

In general, the ionization energy increases moving up a group and moving left to right across a period. Moreover:

For example, sodium requires only 496 kJ/mol or 5.14 eV/atom to ionize it. On the other hand neon, the noble gas, immediately preceding it in the periodic table, requires 2081 kJ/mol or 21.56 eV/atom.

We hope, this article, Ionizing Radiation, helps you. If so, give us a like in the sidebar. Main purpose of this website is to help the public to learn some interesting and important information about radiation and dosimeters.