Facebook Instagram Youtube Twitter
Skip to content
A dose of one gray is equivalent to a unit of energy (joule) deposited in a kilogram of a substance. This unit was named in honour of Louis Harold Gray. Gray – Unit of Radiation Dose

Absorbed dose is defined as the amount of energy deposited by ionizing radiation in a substance. Absorbed dose is given the symbol D. The absorbed dose is usually measured in a unit called the gray (Gy), which is derived from the SI system. The non-SI unit rad is sometimes also used, predominantly in the USA. 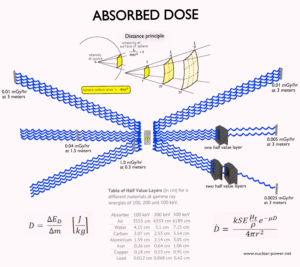 As can be seen, low-level doses are common for everyday life. The previous examples can help illustrate relative magnitudes. From biological consequences point of view, it is very important to distinguish between doses received over short and extended periods. An “acute dose” is one that occurs over a short and finite period of time, while a “chronic dose” is a dose that continues for an extended period of time so that it is better described by a dose rate. High doses tend to kill cells, while low doses tend to damage or change them. Low doses spread out over long periods of time don’t cause an immediate problem to any body organ. The effects of low doses of radiation occur at the level of the cell, and the results may not be observed for many years.

Calculate the primary photon dose rate, in gray per hour (Gy.h-1), at the outer surface of a 5 cm thick lead shield. Primary photon dose rate neglects all secondary particles. Assume that the effective distance of the source from the dose point is 10 cm. We shall also assume that the dose point is soft tissue and it can reasonably be simulated by water and we use the mass energy absorption coefficient for water.

As can be seen, we do not account for the buildup of secondary radiation. If secondary particles are produced or if the primary radiation changes its energy or direction, then the effective attenuation will be much less. This assumption generally underestimates the true dose rate, especially for thick shields and when the dose point is close to the shield surface, but this assumption simplifies all calculations. For this case the true dose rate (with the buildup of secondary radiation) will be more than two times higher.

We hope, this article, Gray – Unit of Radiation Dose, helps you. If so, give us a like in the sidebar. Main purpose of this website is to help the public to learn some interesting and important information about radiation and dosimeters.