Film badges, film badge dosimeters, are small portable devices for monitoring cumulative radiation dose due to ionizing radiation. Principle of operation is similar as for X-ray pictures. The badge consists of two parts: photographic film, and a holder. The film is contained inside a badge. The piece of photographic film that is the sensitive material and it must be removed monthly and developed. The more radiation exposure, the more blackening of the film. The blackening of the film is linear to the dose, and doses up to about 10 Gy can be measured. Film badge dosimeters are applicable to situations where real-time information is not needed, but accumulated dose monitoring records are desired for comparison to field measurements or for assessing the potential for long term health effects. In dosimetry, both the quartz fiber and film badge types are being superseded by TLDs and EPDs (Electronic Personal Dosimeter).

Film badge dosimeters are for one-time use only, they cannot be reused. A film badge dosimeter is dosimeter, that is worn at the surface of the body by the person being monitored, and it records of the radiation dose received. The film badge is used to measure and record radiation exposure due to gamma rays, X-rays and beta particles. The badge incorporates a series of filters (lead, tin, cadmium and plastic) to determine the quality of the radiation. To monitor beta particle emission, the filters use various densities of plastic or even label material. It is typical for a single badge to contain a series of filters of different thicknesses and of different materials; the precise choice may be determined by the environment to be monitored.

Film dosimeter must be worn on a position of the body representative of its exposure. Therefore, the badge is typically worn on the outside of clothing, around the chest or torso to represent dose to the “whole body”. Today, film badges are still in use worldwide worn by people such as x-ray technicians and nurses, who may be exposed to radiation. On the other hand, there has been a trend towards using other dosimeter materials that are less energy dependent and can more accurately assess radiation dose. Film dosimeters are being replaced usually by thermoluminescent dosimeters (TLDs), aluminium oxide based dosimeters, and electronic personal dosimeters (EPDs).

Advantages and Disadvantages of Film Dosimeters

In previous chapters, we described the equivalent dose and the effective dose. But these doses are not directly measurable. For this purpose, the ICRP  has introduced and defined a set of operational quantities, which can be measured and which are intended to provide a reasonable estimate for the protection quantities. These quantities aim to provide a conservative estimate for the value of the protection quantities related to an exposure avoiding both underestimation and too much overestimation.

A set of evaluated data of conversion coefficients for protection, and operational quantities for external exposure to mono-energetic photon, neutron, and electron radiation under specific irradiation conditions is published in reports  (ICRP, 1996b, ICRU, 1997).

The operational quantities for individual monitoring are:

Limits on effective dose are for the sum of the relevant effective doses from external exposure in the specified time period and the committed effective dose from intakes of radionuclides in the same period. For adults, the committed effective dose is computed for a 50-year period after intake, whereas for children it is computed for the period up to age 70 years. The effective whole-body dose limit of 20 mSv is an average value over five years. The real limit is 100 mSv in 5 years, with not more than 50 mSv in any one year. Toward that end, employers carefully monitor the exposure of these individuals using instruments called dosimeters worn on a position of the body representative of its exposure. In most situations of occupational exposure the effective dose, E, can be derived from operational quantities using the following formula: 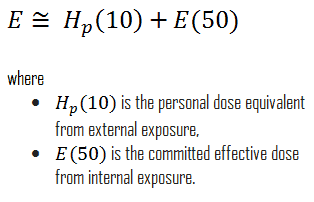 We hope, this article, Film Badge Dosimeter – Film Dosimeter, helps you. If so, give us a like in the sidebar. Main purpose of this website is to help the public to learn some interesting and important information about radiation and dosimeters.