Facebook Instagram Youtube Twitter
Skip to content
In radiation protection, the rem (an abbreviation for Roentgen Equivalent Man) is the non-SI unit of the equivalent dose, which is used predominantly in the USA. The rem represents the equivalent biological effect of the deposit of one hundred ergs (one rad) of gamma rays energy in a kilogram of human tissue. Radiation Dosimetry 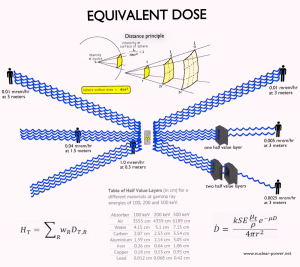 In radiation protection, the rem (an abbreviation for Roentgen Equivalent Man) is the non-SI unit of the equivalent dose, which is used predominantly in the USA. The rem represents the equivalent biological effect of the deposit of one hundred ergs (one rad) of gamma rays energy in a kilogram of human tissue. The rem is not derived from the unit of exposure, the roentgen. The acronym is now a misleading historical artifact, since 1 roentgen actually deposits about 0.96 rem in soft biological tissue, when all weighting factors equal unity.

As was written, the rem is used for radiation dose quantities such as equivalent dose and effective dose. Equivalent dose (symbol HT) is a dose quantity calculated for individual organs (index T – tissue). Equivalent dose is based on the absorbed dose to an organ, adjusted to account for the effectiveness of the type of radiation. The SI unit of HT is the sievert (Sv) or but rem (roentgen equivalent man) is still commonly used (1 Sv = 100 rem).

An equivalent dose of one rem represents that quantity of radiation dose that is equivalent, in terms of specified biological damage, to one rad of X-rays or gamma rays. A dose of one rem caused by gamma radiation is equivalent to an energy deposition of one hundred ergs of energy in a kilogram of a tissue. That means one rem is equivalent to one rad of gamma rays deposited in certain tissue. On the other hand, similar biological damage (one rem) can be caused only by 1/20 rad of alpha radiation (due to high wR of alpha radiation). Similarly as for sieverts, also rems are not a physical dose unit. For example, an absorbed dose of 1 rad by alpha particles will lead to an equivalent dose of 20 rems. This may seem to be a paradox. It implies that the energy of the incident radiation field in ergs has increased by a factor of 20, thereby violating the laws of Conservation of energy. However, this is not the case. The rem is derived from the physical quantity absorbed dose, but also takes into account the biological effectiveness of the radiation, which is dependent on the radiation type and energy. The radiation weighting factor causes that the rem cannot be a physical unit.

One rem is also a large amount of equivalent dose. A person who has absorbed a whole body dose of 1 rem has absorbed one hundred ergs of energy in each kg of body tissue (in case of gamma rays).

Equivalent doses measured in industry and medicine often have usually lower doses than one rem, and the following multiples are often used:

Examples of Doses in rems

Calculate the primary photon dose rate, in gray per hour (Gy.h-1), at the outer surface of a 5 cm thick lead shield. Then calculate the equivalent dose rate in sieverts and rems. Assume that this external radiation field penetrate uniformly through the whole body. Primary photon dose rate neglects all secondary particles. Assume that the effective distance of the source from the dose point is 10 cm. We shall also assume that the dose point is soft tissue and it can reasonably be simulated by water and we use the mass energy absorption coefficient for water.

We hope, this article, Roentgen Equivalent Man – rem – Unit, helps you. If so, give us a like in the sidebar. Main purpose of this website is to help the public to learn some interesting and important information about radiation and dosimeters.