According to the ICRP (Publication 103), the System of Radiological Protection is based on the following three principles:

One of these principles is optimisation of protection, which requires, that:

“doses should all be kept as low as reasonably achievable”.

This statement is known as the ALARA principle. ALARA is an acronym for “as low as is reasonably achievable”. The ALARA principle means that we should make all reasonable efforts to maintain exposures to radiation as far below the dose limits in this part as is practical consistent with the purpose for which the licensed activity is undertaken, while at the same time not wasting a lot of money, time and effort to do so. The ALARA principle arises from the fact that infinite time, effort and money could be spent in the attempt of reducing a risk to zero. 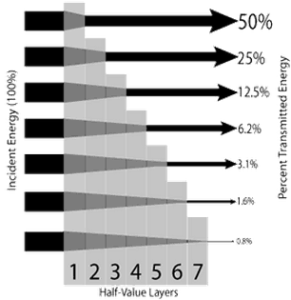 Generally, shielding of gamma rays is based on attenuation theory, which uses the concept of half-value layers. The half value layer expresses the thickness of absorbing material needed for reduction of the incident radiation intensity by a factor of two. As a result, according to attenuation theory, it is impossible to shield radiation completely, because attenuation is exponential. Almost every time some radiation, however small, travels through radiation shield.

Recall, today the protection system is based on the LNT-hypothesis, assuming that all radiation is bad and that the deleterious effect (essentially the cancer risk) increases linearly with dose with no threshold (start at zero dose). But we cannot shield radiation completely, becauses it would require radiation shields of infinite thickness. So what is the optimal thickness of radiation shield? Since zero dose is not attainable, we can only minimize effects of radiation As Low As is Reasonable Achievable (the ALARA – principle). The ALARA principle is also reflected in dose limits. In general, these limits are set to limit stochastic effects to an acceptable level, and to prevent deterministic effects completely.

The term ALARP arises from UK legislation, particularly the Health and Safety at Work etc. Act 1974, which requires “Provision and maintenance of plant and systems of work that are, so far as is reasonably practicable, safe and without risks to health”. The phrase So Far As is Reasonably Practicable (SFARP) in this and similar clauses is interpreted as leading to a requirement that risks must be reduced to a level that is As Low As is Reasonably Practicable (ALARP). ALARP, used especially in the UK, is much more broad term than ALARA, since it is applicable in various fields of the regulation and management of safety-critical and safety-involved systems.

The term “as low as reasonably achievable” (ALARA) used in the optimisation principle is synonymous with ALARP, and is the term used to describe the risk reduction process outside the UK. The term ALARA, or “as low as reasonably achievable” is used interchangeably in the United States of America, almost exclusively in the field of radiation protection. ALARA and ALARP are considered to be equivalent in meaning and purpose.

We hope, this article, ALARA, helps you. If so, give us a like in the sidebar. Main purpose of this website is to help the public to learn some interesting and important information about radiation and dosimeters.