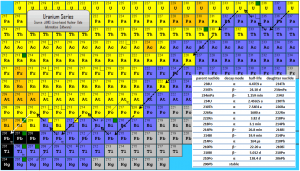 Since alpha decay represents the disintegration of a parent nucleus to a daughter through the emission of the nucleus of a helium atom (which contains four nucleons), there are only four decay series. Within each series, therefore, the mass number of the members may be expressed as four times an appropriate integer (n) plus the constant for that series. As a result, the uranium series is known as the 4n+2 series.

The total energy released from uranium-238 to lead-206, including the energy lost to neutrinos, is 51.7 MeV.

Isotope of uranium-234 is a member of this series. This isotope has the half-life of only 2.46×105 years and therefore it do not belong to primordial nuclides (unlike 235U and 238U). On the other hand, this isotope is still present in the Earth’s crust, but this is due to the fact 234U is an indirect decay product of 238U. 238U decays via alpha decay into 234U. 234U decays via alpha decay into 230Th, except very small fraction (on the order of ppm) of nuclei which decays by spontaneous fission.

In a natural sample of uranium, these nuclei are present in the unalterable proportions of the radioactive equilibrium of the 238U filiation at a ratio of one atom of 234U for about 18 500 nuclei of 238U. As a result of this equilibrium these two isotopes (238U and 234U) contribute equally to the radioactivity of natural uranium. 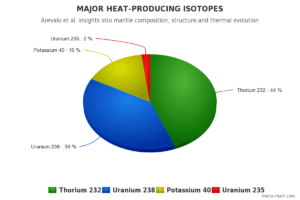 Uranium cascade significantly influences radioactivity (disintegrations per second) of natural samples and natural materials. All the descendants are present, at least transiently, in any natural uranium-containing sample, whether metal, compound, or mineral. For example, pure uranium-238 is weakly radioactive (proportional to its long half-life), but a uranium ore is about 13 times more radioactive than the pure uranium-238 metal because of its daughter isotopes (e.g. radon, radium etc.) it contains. Not only are unstable radium isotopes significant radioactivity emitters, but as the next stage in the decay chain they also generate radon, a heavy, inert, naturally occurring radioactive gas. Moreover the decay heat of uranium and its decay products (e.g. radon, radium etc.) contributes to heating of Earth’s core. Together with thorium and potassium-40 in the Earth’s mantle is thought that these elements are the main source of heat that keeps the Earth’s core liquid.

Types of Decay in Uranium Series

We hope, this article, Uranium Series, helps you. If so, give us a like in the sidebar. Main purpose of this website is to help the public to learn some interesting and important information about radiation and dosimeters.