Facebook Instagram Youtube Twitter
Skip to content
X-rays with high photon energies (above 5–10 keV) are called hard X-rays, while those with lower energy (and longer wavelength) are called soft X-rays. Due to their penetrating ability, hard X-rays are widely used to image the inside of visually opaque objects. Radiation Dosimetry

Most X-rays have a wavelength ranging from 0.01 to 10 nanometers (3×1016 Hz to 3×1019 Hz), corresponding to energies in the range 100 eV to 100 keV. X-ray wavelengths are shorter than those of UV rays and typically longer than those of gamma rays.

X-rays are usually described by their maximum energy, which is determined by the voltage between the electrodes. X-rays with high photon energies (above 5–10 keV) are called hard X-rays, while those with lower energy (and longer wavelength) are called soft X-rays. Due to their penetrating ability, hard X-rays are widely used to image the inside of visually opaque objects. The most often seen applications are in medical radiography. Since the wavelengths of hard X-rays are similar to the size of atoms, they are also useful for determining crystal structures by X-ray crystallography. By contrast, soft X-rays are easily absorbed in air. The attenuation length of 600 eV X-rays in water is less than 1 micrometer. 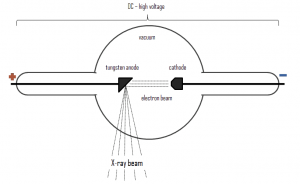 Since X-rays are high-energy photons, which have electromagnetic nature, they can be produced whenever charged particles (electrons or ions) of sufficient energy hit a material. It is similar to the photoelectric effect, where photons can be annihilated when they strike the metal plate, each one surrendering its kinetic energy to an electron.

X-rays can be generated by an X-ray tube, a vacuum tube that uses a high voltage to accelerate the electrons released by a hot cathode to a high velocity. The cathode must be heated in order to emit electrons. Electrons, accelerated by potential differences of tens of thousands of volts, are aimed at a metal target (usually made of tungsten or another heavy metal) in a vacuum tube. The larger the voltage between the electrodes the higher energy will the electrons attain. Upon striking the target, the accelerated electrons are abruptly stopped and X-rays and heat are generated. Most of the energy is transformed into heat in the anode (which must be cooled). Just 1% of the kinetic energy of the electrons is converted into X-rays. X-rays are usually generated perpendicular to the path of the electron beam.

A specialized source of X-rays which is becoming widely used in research is particle accelerator, which generates radiation known as synchrotron radiation. When ultra-relativistic charged particles move through magnetic fields they are forced to move along a curved path. Since their direction of motion is continually changing, they are also accelerating and so emit bremsstrahlung, in this case it is referred to as synchrotron radiation. 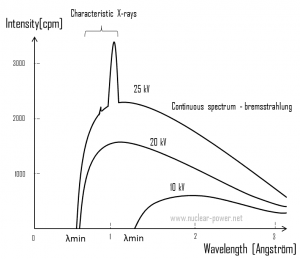 We hope, this article, Soft X-Ray – Hard X-Ray, helps you. If so, give us a like in the sidebar. Main purpose of this website is to help the public to learn some interesting and important information about radiation and dosimeters.