Currently, one rutherford is equivalent to one megabecquerel:

The relationship between half-life and the amount of a radionuclide required to give an activity of one rutherford is shown in the figure. This amount of material can be calculated using λ, which is the decay constant of certain nuclide: 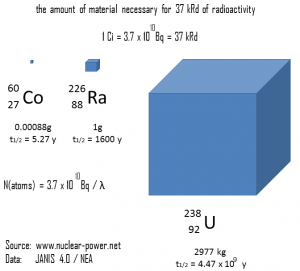 The following figure illustrates the amount of material necessary for 37 kilorutherford of radioactivity. It is obvious, that the longer the half-life, the greater the quantity of radionuclide needed to produce the same activity. Of course, the longer lived substance will remain radioactive for a much longer time. As can be seen, the amount of material necessary for 37 kRd of radioactivity can vary from an amount too small to be seen (0.00088 gram of cobalt-60), through 1 gram of radium-226, to almost three tons of uranium-238.

We hope, this article, Rutherford – Unit of Radioactivity, helps you. If so, give us a like in the sidebar. Main purpose of this website is to help the public to learn some interesting and important information about radiation and dosimeters.