The following features of beta particles (electrons) are crucial in their shielding.

Materials with low atomic number Z are appropriate as beta particle shields. With high Z materials the bremsstrahlung (secondary radiation – X-rays) is associated. This radiation is created during slowing down of beta particles while they travel in a very dense medium. Heavy clothing, thick cardboard or thin aluminium plate will provide protection from beta radiation and prevents of production of the bremsstrahlung. Lead and plastic are commonly used to shield beta radiation. Radiation protection literature is ubiquitous in advising the placement of plastic first to absorb all the beta particles before any lead shielding is used. This advice is based on the well established theory that radiative losses (bremsstrahlung production) are more prevalent in higher atomic number (Z) materials than in low Z materials. 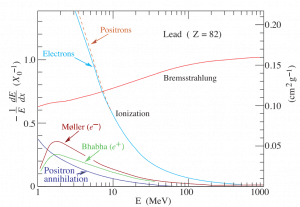 Fractional energy loss per radiation length in lead as a
function of electron or positron energy.

We hope, this article, Shielding of Beta Radiation – Electrons, helps you. If so, give us a like in the sidebar. Main purpose of this website is to help the public to learn some interesting and important information about radiation and dosimeters.