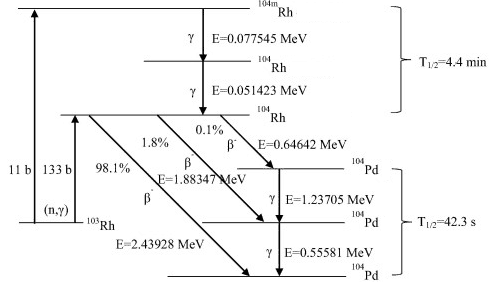 One of possible materials is rhodium as the emitter. A SPND with a rhodium emitter has a relatively high sensitivity, high burn-up rate, perturbs the local power density and has a (two-fold) delayed signal. Rhodium-based detector is the beta-current type of self-powered detector, which uses the following activation reaction to produce a current that can be measured.

As can be seen, a neutron captured by rhodium-103 causes a rhodium-103 atom to become a radioactive rhodium-104 atom. The rhodium-104 then decays into palladium-104 plus a beta particle (electron). The beta particle has enough energy to pass through the insulator and reach the collector. The half-life of activated rhodium-104 is 42.3 seconds, which delays the emission of the charged particle. Rhodium based detector uses this production of beta particles (electrons) to create a current that is proportional to the number of neutrons captured by the emitter, which is also proportional to local reactor power density. A portion of the detector’s current flow is due to gamma rays. In order to compensate for this erroneous signal, a background correction is performed via background detector, which consists of the same components as the detector, except the rhodium is removed.

The following characteristics are typical when used in thermal power reactor (e.g. PWR).

We hope, this article, Rhodium-104 as Emitter – Rhodium-103 as Material, helps you. If so, give us a like in the sidebar. Main purpose of this website is to help the public to learn some interesting and important information about radiation and dosimeters.