But not all neutrons are released at the same time following fission. Even the nature of creation of these neutrons is different. From this point of view we usually divide the fission neutrons into two following groups: 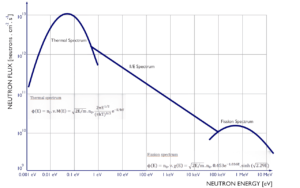 The first part of the neutron flux spectrum in thermal reactors, is the region of fast neutrons. All neutrons produced by fission are born as fast neutrons with high kinetic energy. 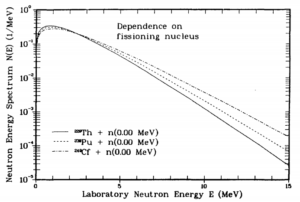 Therefore the fast neutron spectrum can be described by following points:

The fast neutron spectrum can be approximated by the following  (normalized to one) distribution:

We hope, this article, Fission Neutron, helps you. If so, give us a like in the sidebar. Main purpose of this website is to help the public to learn some interesting and important information about radiation and dosimeters.