Skip to content
Electron capture is a process, in which a parent nucleus captures one of its orbital electrons and emits a neutrino. Electron capture, known also as inverse beta decay is sometimes included as a type of beta decay, because the basic nuclear process, mediated by the weak interaction, is the same. Radiation Dosimetry

Electron capture is a process, in which a parent nucleus captures one of its orbital electrons and emits a neutrino. Electron capture, known also as inverse beta decay is sometimes included as a type of beta decay, because the basic nuclear process, mediated by the weak interaction, is the same. In this process, a proton-rich nucleus can also reduce its nuclear charge by one unit by absorbing an atomic electron. 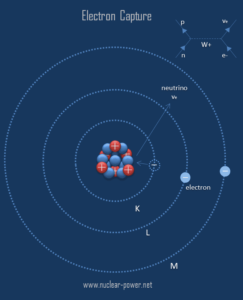 In this process a parent nucleus may capture one of its orbital electrons and emits a neutrino. The electron is normally captured from an inner shell of an atom (K-shell). This process competes with positive beta decay, which is more common for lighter nuclei. Electron capture is the primary decay mode for isotopes with insufficient energy (Q < 2 x 511 keV) difference between the isotope and its prospective daughter for the nuclide to decay by emitting a positron. On the other hand, electron capture is always an alternative decay mode for radioactive isotopes that do have sufficient energy to decay by positron emission.

The resulting daughter nuclide, if it is in an excited state, then transitions to its ground state usually gamma ray emission, but de-excitation may also take place by internal conversion. Since the process leaves a vacancy in the electron energy level from which the electron came, the outer electrons of the atom cascade down to fill the lower atomic levels, and one or more characteristic X-rays are usually emitted. Sometimes X-ray may interact with another orbital electron, which may be ejected from the atom. This second ejected electron is called an Auger electron. 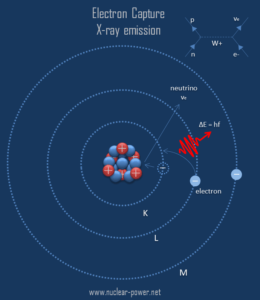 Beta decay is governed by the weak interaction. During beta decay one of two down quarks changes into an up quark by emitting a W– boson (carries away a negative charge). The W– boson then decays into a beta particle and an antineutrino. This process is equivalent to the process, in which a neutrino interacts with a neutron.

As can be seen from the figure, the weak interaction changes one flavor of quark into another. Note that, the Standard Model counts six flavours of quarks and six flavours of leptons. The weak interaction is the only process in which a quark can change to another quark, or a lepton to another lepton (flavor change). Neither the strong interaction nor electromagnetic permit flavour changing. This fact is crucial in many decays of nuclear particles. In the fusion process, which, for example, powers the Sun, two protons interact via the weak force to form a deuterium nucleus, which reacts further to generate helium. Without the weak interaction, the diproton would decay back into two hydrogen-1 unbound protons through proton emission. As a result, the sun would not burn without it since the weak interaction causes the transmutation p -> n.

In contrast to alpha decay, neither the beta particle nor its associated neutrino exist within the nucleus prior to beta decay, but are created in the decay process. By this process, unstable atoms obtain a more stable ratio of protons to neutrons. The probability of a nuclide decaying due to beta and other forms of decay is determined by its nuclear binding energy. For either electron or positron emission to be energetically possible, the energy release (see below) or Q value must be positive.

We hope, this article, Electron Capture – Inverse Beta Decay, helps you. If so, give us a like in the sidebar. Main purpose of this website is to help the public to learn some interesting and important information about radiation and dosimeters.