Beta decay or β decay represents the disintegration of a parent nucleus to a daughter through the emission of the beta particle. This transition (β– decay) can be characterized as:

In both alpha and gamma decay, the resulting particle (alpha particle or photon) has a narrow energy distribution, since the particle carries the energy from the difference between the initial and final nuclear states. For example, in case of alpha decay, when a parent nucleus breaks down spontaneously to yield a daughter nucleus and an alpha particle, the sum of the mass of the two products does not quite equal the mass of the original nucleus (see Mass Defect). As a result of the law of conservation of energy, this difference appears in the form of the kinetic energy of the alpha particle. Since the same particles appear as products at every breakdown of a particular parent nucleus, the mass-difference should always be the same, and the kinetic energy of the alpha particles should also always be the same. In other words, the beam of alpha particles should be monoenergetic.

It was expected that the same considerations would hold for a parent nucleus breaking down to a daughter nucleus and a beta particle. Because only the electron and the recoiling daughter nucleus were observed beta decay, the process was initially assumed to be a two body process, very much like alpha decay. It would seem reasonable to suppose that the beta particles would form also a monoenergetic beam.

To demonstrate energetics of two-body beta decay, consider the beta decay in which an electron is emitted and the parent nucleus is at rest, conservation of energy requires: 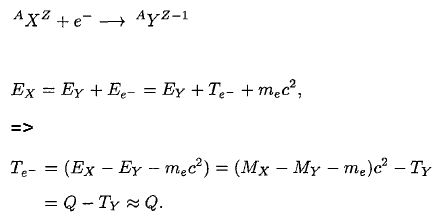 Since the electron is much lighter particle it was expected that it will carry away most of the released energy, which would have a unique value Te-.

But the reality was different. The spectrum of beta particles measured by Lise Meitner and Otto Hahn in 1911 and by Jean Danysz in 1913 showed multiple lines on a diffuse background, however. Moreover virtually all of the emitted beta particles have energies below that predicted by energy conservation in two-body decays. The electrons emitted in beta decay have a continuous rather than a discrete spectrumappeared to contradict conservation of energy, under the then-current assumption that beta decay is the simple emission of an electron from a nucleus. When this was first observed, it appeared to threaten the survival of one of the most important conservation laws in physics!

To account for this energy release, Pauli proposed (in 1931) that there was emitted in the decay process another particle, later named by Fermi the neutrino. It was clear, this particle must be highly penetrating and that the conservation of electric charge requires the neutrino to be electrically neutral. This would explain why it was so hard to detect this particle. The term neutrino comes from Italian meaning “little neutral one” and neutrinos are denoted by the Greek letter ν (nu). In the process of beta decay the neutrino carries the missing energy and also in this process the law of conservation of energy remains valid.

We hope, this article, Conservation Law in Beta Decay, helps you. If so, give us a like in the sidebar. Main purpose of this website is to help the public to learn some interesting and important information about radiation and dosimeters.