Alpha decay (or α-decay and also alpha radioactivity) represents the disintegration of a parent nucleus to a daughter through the emission of the nucleus of a helium atom. This transition can be characterized as: 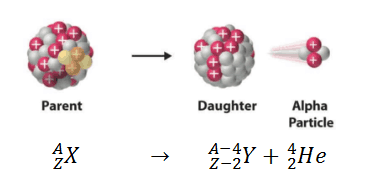 Alpha decay is a quantum tunneling process. In order to be emitted, the alpha particle must penetrate a potential barrier. This is similar to cluster decay, in which an atomic nucleus emits a small “cluster” of neutrons and protons (e.g. 12C).

Consider a typical reaction, in which the projectile a and the target A gives place to two products, B and b. This can also be expressed in the notation that we used so far, a + A → B + b, or even in a more compact notation, A(a,b)B.

The Q-value of this reaction is given by:

When describing alpha decay (a reaction without projectile), the disintegrating nucleus is usually referred to as the parent nucleus and the nucleus remaining after the event as the daughter nucleus. The total rest mass of the daughter nucleus and of the nuclear radiation released in an alpha disintegration, mDaughter + mRadiation, is always less than that of the parent nucleus, mparent. The mass-energy difference,

appears as the disintegration energy, liberated in the process. For example, the Q-value of typical alpha decay is:

The disintegration energy of about 5 MeV is typical kinetic energy of alpha particle. In order to fulfill the law of conservation of momentum, most of the disintegration energy must appear as the kinetic energy of alpha particle. After an alpha or beta decay, the daughter nucleus is often left in an excited energy state. In order to stabilize itself, it subsequently emits high-energy photons, γ-rays.

We hope, this article, Alpha Decay – Q-value, helps you. If so, give us a like in the sidebar. Main purpose of this website is to help the public to learn some interesting and important information about radiation and dosimeters.