Facebook Instagram Youtube Twitter
Skip to content
Radon is a naturally occuring noble gas, that posses a very important health risks for the population. The average annual radiation dose to a person from radon is about 2 mSv/year and it may vary over many orders of magnitude from place to place. Radon – Health Effects – Health Risks

Radon is a colorless, odorless, tasteless noble gas, occurring naturally as the decay product of radium. All isotopes of radon are radioactive, but the two radon isotopes radon-222 and radon-220 are very important from radiation protection point of view.

It is important to note that radon is a noble gas, whereas all its decay products are metals. The main mechanism for the entry of radon into the atmosphere is diffusion through the soil. As a gas, radon diffuses through rocks and the soil. When radon disintegrates, the daughter metallic isotopes are ions that will be attached to other molecules like water and to aerosol particles in the air. Therefore all discussions of radon concentrations in the environment refer to radon-222. While the average rate of production of radon-220 (thoron) is about the same as that of radon-222, the amount of radon-220 in the environment is much less than that of radon-222 because of significantly shorter half-life (it has less time to diffuse) of radon-222 (55 seconds, versus 3.8 days respectively). Simply radon-220 has lower chance to escape from bedrock.

Radon-222 is a gas produced by the decay of radium-226. Both are a part of the natural uranium series. Since uranium is found in soil throughout the world in varying concentrations, also dose from gaseous radon is varying throughout the world. Radon-222 is the most important and most stable isotope of radon. It has a half-life of only 3.8 days, making radon one of the rarest elements since it decays away so quickly. An important source of natural radiation is radon gas, which seeps continuously from bedrock but can, because of its high density, accumulate in poorly ventilated houses. The fact radon is gas plays a crucial role in spreading of all its daughter nuclei. Simply radon is a transport medium from bedrock to atmosphere (or inside buildings) for its short-lived decay products (Pb-210 and Po-210), that posses much more health risks.

Radon is usually the largest natural source of radiation contributing to the exposure of members of the public, sometimes accounting for half the total exposure from all sources. The health risk due to exposure to radon and thoron comes principally from the inhalation of the short-lived decay products (Pb-210 and Po-210) and the resulting alpha particle irradiation of the bronchi and the lungs.

As long as these isotopes are outside the body, only the gamma radiation will be able to give a dose. But radon is a gas and diffuses out of the ground to mix with air. The half-life of radon-222 is long compared with the residence time of air in the lungs, so that relatively little radon decay during respiration. Moreover, radon is a noble gas and its inertness prevents its long-term retention within body. But when radon disintegrates, the daughter metallic isotopes (Pb-210 and Po-210) are not inert and they be attached to other molecules like water and to aerosol particles in  air. When these particles are inhaled, some of lead-210 is retained by the body. Ingestion of lead-210 is also a possible way. Since lead-210 is a weak beta emitter, it does not cause major doses. Lead-210 is thus a transport medium from indoor air to the body. The radiation from radon and its decay products is a mixture of alpha particles and beta particles as well as gamma radiation. When the isotopes come inside the body, all types of radiation contribute.

But it is the polonium-210, the decay product of lead-210, that emits a 5.3 MeV alpha particle, which provides most of equivalent dose. Alpha particles, that belongs to high-LET radiation, are fairly massive and carry a double positive charge, so they tend to travel only a short distance and do not penetrate very far into tissue if at all. However alpha particles will deposit their energy over a smaller volume (possibly only a few cells if they enter a body) and cause more damage to those few cells (more than 80 % of the absorbed energy from radon is due to the alpha particles). Therefore, the radiation weighting factor for alpha radiation is equal to 20. An absorbed dose of 1 mGy by alpha particles will lead to an equivalent dose of 20 mSv. In summary, radon and lead can be viewed as different sorts of carriers for polonium-210. 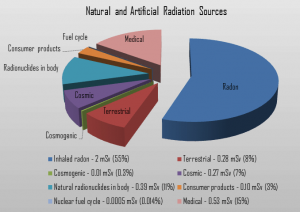 The amount of isotopes ingested with the food is negligible, and all concern is about the breathing and the deposition of radon daughters in the bronchi and in the lungs. Among non-smokers, radon is the largest cause of lung cancer and, overall, the second-leading cause. The average annual radiation dose to a person from radon is about 2 mSv/year and it may vary over many orders of magnitude from place to place. According to a 2003 report EPA’s Assessment of Risks from Radon in Homes, epidemiological evidence shows a clear link between lung cancer and high concentrations of radon.

It must be emphasized, cigarettes contain also polonium-210, originating from the decay products of radon, which stick to tobacco leaves. Polonium-210 emits a 5.3 MeV alpha particle, which provides most of equivalent dose. Heavy smoking results in a dose of 160 mSv/year to localized spots at the bifurcations of segmental bronchi in the lungs from the decay of polonium-210. This dose is not readily comparable to the radiation protection limits, since the latter deal with whole body doses, while the dose from smoking is delivered to a very small portion of the body.

It must be emphasized, the concentrations of radon-222 and radon-220 in the soil and in the building materials vary over many orders of magnitude from place to place and show significant time variation at any given site. Locations with higher radon background are well mapped in each country. In the open air, it ranges from 1 to 100 Bq/m3, even less (0.1 Bq/m3) above the ocean. In caves or aerated mines, or ill-aerated houses, its concentration climbs to 20–2,000 Bq/m3. In the outdoor atmosphere, there is also some advection caused by wind and changes in barometric pressure.

Problems with radon are in houses, where it can accumulate especially, due to its high density, in low areas such as basements and crawl spaces. Radon can also occur in ground water – for example, in some spring waters and hot springs. Several possibilities exist for the release of radon into houses. The fact radon is a noble gas plays a crucial role in spreading of all its daughter nuclei. Simply radon is a transport medium from bedrock to atmosphere (or inside buildings) for its short-lived decay products (Pb-210 and Po-210), that posses much more health risks. The main sources are the rock or soil on which the house is built, as well as the water supply. The main mechanism for the entry of radon into buildings is diffusion through the soil. As a gas, radon diffuses through rocks and the soil. The radon gas can penetrate into the house through cracks (due to a chimney effect) in the floor and walls of the basement. Heating of the air creates a suction of air from the lower part of the house, towards the higher part of the house. Without any radon membrane,  this actually means that air from the ground beneath the house is sucked into the house through numerous floor cracks and openings.

Furthermore, the building materials (e.g., some granites) is also a source for radon. Another source for radon is the water supply. Water from wells, in particular in regions with radium rich granite, may contain high radon concentrations. This is material with higher uranium/radium concentrations from which radon is continuously generated. Such materials, e.g., slag, fly ash, etc., could be used in some locations. For building materials that are used for the construction of houses, the critical limits for the specific radium concentrations must be determined.

The greatest risk of radon exposure arises in buildings that are airtight, insufficiently ventilated, and have foundation leaks that allow air from the soil into basements and dwelling rooms. The inside radon level vary considerable with weather, time of the year and even time of the day – and of course with the airing system. For example, sleeping with an open window can reduce the radon content considerable.

Most countries have adopted a radon concentration of 200–400 Bq/m3 for indoor air as an Action or Reference Level. If testing shows levels less than 4 picocuries radon per liter of air (150 Bq/m3), then no action is necessary. Very high radon concentrations (>1000 Bq/m3) have been found in houses built on soils with a high uranium content and/or high permeability of the ground.

Mitigation of radon in the air is accomplished through ventilation, either collected below a concrete floor slab or a membrane on the ground, or by increasing the air changes per hour in the building. A radon resisting membranes are usually produced from low density polyethylene (LDPE) and are extended across the whole of the building, including the floor and walls. Another way for mitigation of radon is a treatment system using aeration or activated charcoal to remove radon from domestic water supplies.

Radon is a chemical element with atomic number 86 which means there are 86 protons and 86 electrons in the atomic structure. The chemical symbol for Radon is Rn.

Radon is a radioactive, colorless, odorless, tasteless noble gas. Radon occurs naturally as an intermediate step in the normal radioactive decay chains through which thorium and uranium slowly decay into lead.

Note that, each element may contain more isotopes, therefore this resulting atomic mass is calculated from naturally-occuring isotopes and their abundance. 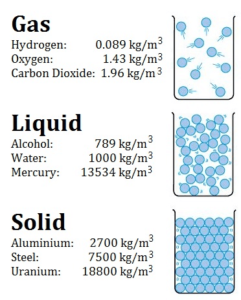 Density is defined as the mass per unit volume. It is an intensive property, which is mathematically defined as mass divided by volume:

In words, the density (ρ) of a substance is the total mass (m) of that substance divided by the total volume (V) occupied by that substance. The standard SI unit is kilograms per cubic meter (kg/m3). The Standard English unit is pounds mass per cubic foot (lbm/ft3).

See also: What is Density

Note that, these points are associated with the standard atmospheric pressure.

Latent Heat of Vaporization of Radon is 16.4 kJ/mol.

We hope, this article, Radon – Health Effects – Health Risks, helps you. If so, give us a like in the sidebar. Main purpose of this website is to help the public to learn some interesting and important information about radiation and dosimeters.