Skip to content
Spontaneous fission is a decay process, in which an unstable nucleus spontaneosly and randomly splits into smaller parts (lighter nuclei). Spontaneous fissions release neutrons as all fissions do. Radiation Dosimetry 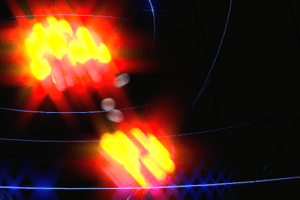 In general, nuclear fission is a nuclear reaction in which the nucleus of an atom splits into smaller parts (lighter nuclei). The fission process often produces free neutrons and photons (in the form of gamma rays), and releases a large amount of energy. In nuclear physics, nuclear fission is either a nuclear reaction or a radioactive decay process. The case of decay process is called spontaneous fission and it is very rare process.

Spontaneous fission is also possible if we will study the nuclear binding curve. This type of decay is energetically possible for a nucleus having A > 100.  Although spontaneous fission is expected to become more probable as the mass number increases, it is still a very rare process even in uranium.

Spontaneous fission is feasible over practical observation times only for mass numbers greater than about 232. For example, 232Th, 235U, and 238U are primordial nuclides and have left evidence of undergoing spontaneous fission in their minerals.

For heavy transuranic elements the spontaneous fission transition rate increase with the mass number and it may become the dominant decay mode at mass numbers greater than about 260.

The spontaneous fission of naturally occurring isotopes of uranium (uranium-238 and uranium-235) does leave trails of damage in the crystal structure of uranium-containing minerals when the fission fragments recoil through them. A radiometric dating technique based on analyses of these damage trails, or tracks, left by fission fragments in certain uranium-bearing minerals and glasses is known as fission track dating.

The main isotopes, which have to be considered in the fuel cycle of all commercial light water reactors, are: 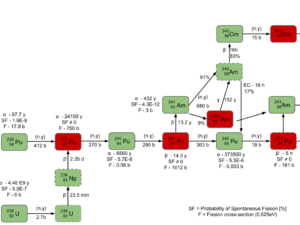 The term “source neutrons” refers to neutrons other than prompt or delayed fission neutrons. In general, they come from sources other than neutron-induced fission. These neutrons are very important during reactor startup and shutdown operations when the reactor is subcritical, because they allow to monitor the subcriticality of a reactor usually via source range excore neutron detectors.

We hope, this article, Spontaneous Fission, helps you. If so, give us a like in the sidebar. Main purpose of this website is to help the public to learn some interesting and important information about radiation and dosimeters.