There are three main features of neutrons, which are crucial in the shielding of neutrons. 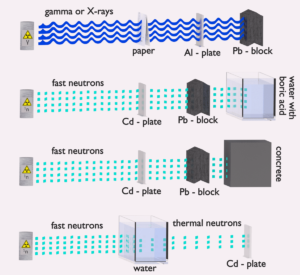 Basic materials for shielding of neutrons.
14N(n,p)14C - the nuclear reaction of importance in the radiation protection
14N (n,p) 14C

This nuclear reaction (charged particle reaction) continually take place especially in the earth’s atmosphere, forming equilibrium amounts of the radionuclide 14C. In nuclear power plants, it is important especially from radiation protection point of view. The reaction is responsible for most of the radiation dose delivered to the human body by thermal neutrons. The nitrogen atoms are contained in proteins, therefore if the human body is exposed to thermal neutrons, then these thermal neutrons may be absorbed by 14N, causing a proton emission. Protons are directly ionizing particles and deposit their energy over a very short distance in the body tissue.

We hope, this article, Shielding of Neutron Radiation, helps you. If so, give us a like in the sidebar. Main purpose of this website is to help the public to learn some interesting and important information about radiation and dosimeters.