In fact in some cases an inappropriate shielding may even worsen the radiation situation instead of protecting people from the ionizing radiation.  Basic factors, which have to be considered during proposal of radiation shielding, are:

Generally in nuclear industry the radiation shielding has many purposes. In nuclear power plants the main purpose is to reduce the radiation exposure to persons and staff in the vicinity of radiation sources. In NPPs the main source of radiation is conclusively the nuclear reactor and its reactor core. Nuclear reactors are in generall powerful sources of entire spectrum of types of ionizing radiation. Shielding used for this purpose is called biological shielding.

But this is not the only purpose of radiation shielding. Shields are also used in some reactors to reduce the intensity of gamma rays or neutrons incident on the reactor vessel. This radiation shielding protects the reactor vessel and its internals (e.g. the core support barrel) from the excessive heating due to gamma ray absorption fast neutron moderation. Such shields are usually referred to as thermal shields.

A little strange radiation shielding is usually used to protect material of reactor pressure vessel (especially in PWR power plants). Structural materials of pressure vessel and reactor internals are damaged especially by fast neutrons. Fast neutrons create structural defects, which in result lead to embrittlement of material of pressure vessel. In order to minimize the neutron flux at the vessel wall, also core loading strategy can be modified. In “out-in” fuel loading strategy fresh fuel assemblies are placed at the periphery of the core.  This configuration causes high neutron fluence at the vessel wall. Therefore the “in-out” fuel loading strategy (with low leakage loading patterns – L3P) has been adopted at many nuclear power plants. In contrast to “out-in” strategy, low leakage cores have fresh fuel assemblies in the second row, not at the periphery of the core. The periphery contains fuel with higher fuel burnup and lower relative power and serves as the very sophisticated radiation shield.

In nuclear power plants the central problem is to shield against gamma rays and neutrons, because the ranges of charged particles (such as beta particles and alpha particles) in matter are very short. On the other hand we must deal with shielding of all types of radiation, because each nuclear reactor is a significant source of all types of ionizing radiation.

The following features of beta particles (electrons) are crucial in their shielding.

Materials with low atomic number Z are appropriate as beta particle shields. With high Z materials the bremsstrahlung (secondary radiation – X-rays) is associated. This radiation is created during slowing down of beta particles while they travel in a very dense medium. Heavy clothing, thick cardboard or thin aluminium plate will provide protection from beta radiation and prevents of production of the bremsstrahlung. Lead and plastic are commonly used to shield beta radiation. Radiation protection literature is ubiquitous in advising the placement of plastic first to absorb all the beta particles before any lead shielding is used. This advice is based on the well established theory that radiative losses (bremsstrahlung production) are more prevalent in higher atomic number (Z) materials than in low Z materials.

In short, effective shielding of gamma radiation is in most cases based on use of materials with two following material properties:

Although water is neither high density nor high Z material, it is commonly used as gamma shields. Water provides a radiation shielding of fuel assemblies in a spent fuel pool during storage or during transports from and into the reactor core.

In general, the gamma radiation shielding is more complex and difficult than the alpha or beta radiation shielding. In order to understand comprehensively the way how a gamma ray loses its initial energy, how can be attenuated and how can be shielded we must have detailed knowledge of the its interaction mechanisms.

Calculation of Shielded Dose Rate in Sieverts from Contaminated Surface

Assume a surface, which is contamined by 1.0 Ci of 137Cs. Assume that this contaminant can be aproximated by the point isotropic source which contains 1.0 Ci of 137Cs, which has a half-life of 30.2 years. Note that the relationship between half-life and the amount of a radionuclide required to give an activity of one curie is shown below. This amount of material can be calculated using λ, which is the decay constant of certain nuclide:

The extended formula for the dose rate calculation is: 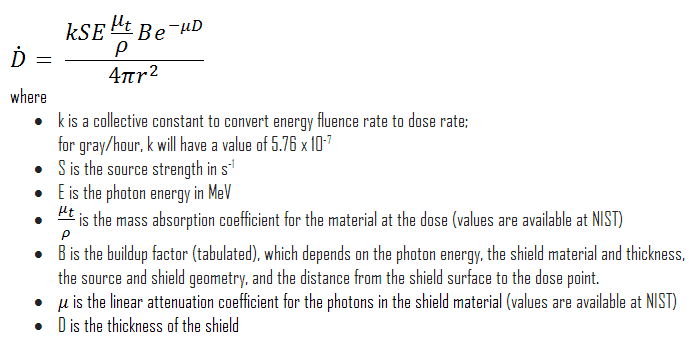 We hope, this article, Shielding of Ionizing Radiation, helps you. If so, give us a like in the sidebar. Main purpose of this website is to help the public to learn some interesting and important information about radiation and dosimeters.