What is Radioactive Decay

Nuclear decay (Radioactive decay) occurs when an unstable atom loses energy by emitting ionizing radiation. Radioactive decay is a random process at the level of single atoms, in that, according to quantum theory, it is impossible to predict when a particular atom will decay. In other words, a nucleus of a radionuclide has no “memory”. A nucleus does not “age” with the passage of time. Thus, the probability of its breaking down does not increase with time, but stays constant no matter how long the nucleus has existed. During its unpredictable decay this unstable nucleus spontaneosly and randomly decomposes to form a different nucleus (or a different energy state – gamma decay), giving off radiation in the form of atomic partices or high energy rays. This decay occurs at a constant, predictable rate that is referred to as half-life. A stable nucleus will not undergo this kind of decay and is thus non-radioactive.

There are three basic modes of radioactive decay:

As was written, atomic nuclei consist of protons and neutrons, which attract each other through the nuclear force, while protons repel each other via the electromagnetic force due to their positive charge. These two forces compete, leading to various stability of nuclei. There are only certain combinations of neutrons and protons, which forms stable nuclei. Neutrons stabilize the nucleus, because they attract each other and protons , which helps offset the electrical repulsion between protons. As a result, as the number of protons increases, an increasing ratio of neutrons to protons is needed to form a stable nucleus. If there are too many (neutrons also obey the Pauli exclusion principle) or too few neutrons for a given number of protons, the resulting nucleus is not stable and it undergoes radioactive decay. Most atoms found in nature are stable and do not emit particles or energy that change form over time. Of the first 82 elements in the periodic table, 80 have isotopes considered to be stable. Technetium, promethium and all the elements with an atomic number over 82 are unstable and decompose through radioactive decay. Unstable isotopes decay spontaneously through various radioactive decay pathways, most commonly alpha decay, beta decay, gamma decay or electron capture. Many other rare types of decay, such as spontaneous fission or neutron emission are known.

Calculations of the decay of radioactive nuclei are relatively straightforward, owing to the fact that there is only one fundamental law governing all decay process. This law states that the probability per unit time that a nucleus will decay is a constant, independent of time. This constant is called the decay constant and is denoted by λ, “lambda”. The radioactive decay of certain number of atoms (mass) is exponential in time. 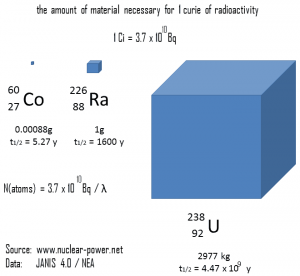 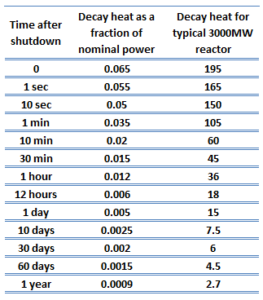 When a reactor is shut down, fission essentially ceases, but decay energy is still being produced. The energy produced after shutdown is referred to as decay heat. The amount of decay heat production after shutdown is directly influenced by the power history (fission products accumulation) of the reactor prior to shutdown and by the level of fuel burnup (actinidies accumulation – especially in case of spent fuel handling). A reactor operated at full power for 10 days prior to shutdown has much higher decay heat generation than a reactor operated at low power for the same period. On the other hand, when the reactor changes its power from 50% to 100% of full power, the ratio of decay heat to neutron power drops to roughly half its previous level, and then builds up slowly as the fission product inventory adjusts to the new power.

The decay heat produced after a reactor shutdown from full power is initially equivalent to about 6 to 7% of the rated thermal power. Since radioactive decay is a random process at the level of single atoms, it is governed by the radioactive decay law. Note that, irradiated nuclear fuel contains a large number of different isotopes that contribute to decay heat, which are all subject to the radioactive decay law. Therefore a model describing decay heat must consider decay heat to be a sum of exponential functions with different decay constants and initial contribution to the heat rate. Fission fragments with a short half-life are much more radioactive (at the time of production) and contribute significantly to decay heat, but will obviously lose its share rapidly. On the other hand, fission fragments and transuranic elements with a long half-life are less radioactive (at the time of production) and produces less decay heat, but will obviously lose its share more slowly. This decay heat generation rate diminishes to about 1% approximately one hour after shutdown.

We hope, this article, Radioactive Decay, helps you. If so, give us a like in the sidebar. Main purpose of this website is to help the public to learn some interesting and important information about radiation and dosimeters.