Albert Einstein and Photoelectric Effect / Discovery
The phenomenon, that a surface (typically alkali metals) when exposed to electromagnetic radiation (visible light) emits electrons, was discovered by Hertz and Hallwachs in 1887 during experiments with a spark-gap generator. Hertz found that the sensitivity of his spark-gap device can be increased by exposition to visible or ultraviolet light and that light obviously had some electrical effect. He did not further pursue investigation of this effect.Shortly after Hertz’s discovery in 1899, English physicist J.J.Thomson showed that UV light, which fall onto metal surface, trigger the emission of electrons from the surface. In 1902, Hungarian physicist Philipp Lenard made the first quantitative measurements of the photoelectric effect. He observed that the energy of individual emitted electrons increased with the frequency of the light (which is related to the color).

While this is interesting, it is hardly explainable by classical theory of electromagnetic radiation which assumed the existence of a stationary medium (the luminiferous aether) through which light propagated. Subsequent investigations into the photoelectric effect results in the fact that these explorations did not fit with the classical theory of electromagnetic radiation.In 1905, Albert Einstein published four groundbreaking papers on the photoelectric effect, Brownian motion, special relativity, and the equivalence of mass and energy. These papers were published in the Annalen der Physik journal and contributed significantly to the foundation of modern physics. In the paper on the photoelectric effect (“On a Heuristic Viewpoint Concerning the Production and Transformation of Light”) he solved the paradox by describing light as composed of discrete quanta (German: das Lichtquant), rather than continuous waves.This theory was builded on Max Planck’s blackbody radiation theory, which assumes that luminous energy can be absorbed or emitted only in discrete amounts, called quanta. The photon’s energy in each quantum of light is equal to its frequency (ν) multiplied by a constant known as Planck’s constant (h), or alternately, using the wavelength (λ) and the speed of light (c):

Each photon above a threshold frequency (specific for each material) has the needed energy to eject a single electron, creating the observed effect. Einstein’s theory predicts that the maximum kinetic energy of emitted electron is dependent only on the frequency of the incident light and not on its intensity. Shining twice as much light (high-intensity) results in twice as many photons, and more electrons releasing, but the maximum kinetic energy of those individual electrons remains the same. Experimentation in the photoelectric effect was carried out extensively by Robert Millikan in 1915, Robert Millikan showed that Einstein’s prediction was correct. This discovery contributed to the quantum revolution in physics and earned Einstein the Nobel Prize in Physics in 1921. 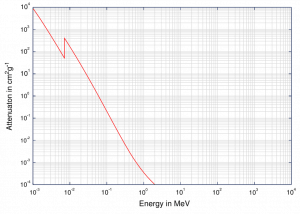 We hope, this article, Photoelectric Effect, helps you. If so, give us a like in the sidebar. Main purpose of this website is to help the public to learn some interesting and important information about radiation and dosimeters.