Facebook Instagram Youtube Twitter
Skip to content
The ionization chamber, also known as the ion chamber, is electrical device that detects various types of ionizing radiation. The voltage of detector is adjusted so that the conditions correspond to the ionization region. Radiation Dosimetry

The ionization chamber, also known as the ion chamber, is electrical device that detects various types of ionizing radiation. The voltage of detector is adjusted so that the conditions correspond to the ionization region. The voltage is not high enough to produce gas amplification (secondary ionization). Detectors in the ionization region operate at a low electric field strength, selected such that no gas multiplication takes place. The charge collected (output signal) is independent of the applied voltage and for single minimum-ionizing particles tends to be quite small and usually require special low-noise amplifiers for attaining efficient operating performance. Ionization chambers are preferred for high radiation dose rates because they have no “dead time”, a phenomenon which affects the accuracy of the Geiger-Mueller tube at high dose rates. This is due to the fact, there is no inherent amplification of signal in the operating medium and therefore these types of counters do not require much time to recover from large currents. In addition, because there is no amplification, they provide excellent energy resolution, which is limited primarily by electronic noise.

Ionization chambers can be operated in current or pulse mode. In contrast, proportional counters or Geiger counters are almost always used in pulse mode. Detectors of ionizing radiation can be used both for activity measurements as well as for dose measurement. With knowledge about the energy needed to form an pair of ions – the dose can be obtained.

In the ionization region, an increase in voltage does not cause a substantial increase in the number of ion-pairs collected. The number of ion-pairs collected by the electrodes is equal to the number of ion-pairs produced by the incident radiation, and is dependent on the type and energy of the particles or rays in the incident radiation. Therefore, in this region the curve is flat. The voltage must be higher than the point where dissociated ion-pairs can recombine. On the other hand, the voltage is not high enough to produce gas amplification (secondary ionization). Detectors in the ionization region operate at a low electric field strength, selected such that no gas multiplication takes place. Their current is independent of the applied voltage, and they are preferred for high radiation dose rates because they have no “dead time”, a phenomenon which affects the accuracy of the Geiger-Mueller tube at high dose rates. 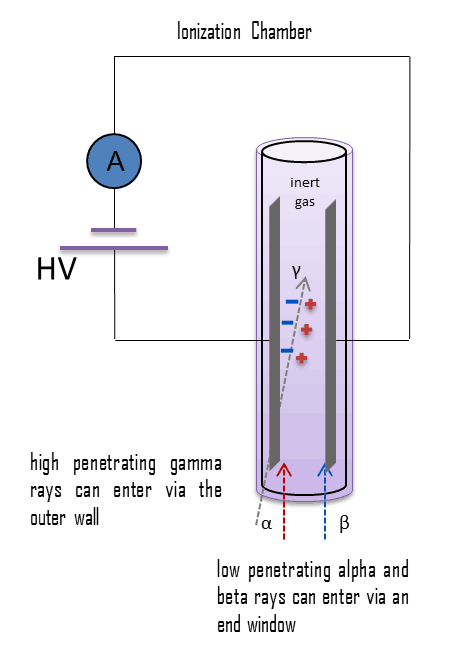 The chamber has a cathode and an anode that are held at some voltage (perhaps 100 – 200 V), and the device is characterized by a capacitance that is determined by the geometry of the electrodes. Flat plates or concentric cylinders may be utilized in the construction of an ionization chamber. The flat plate design is preferred because it has a well-defined active volume and ensures that ions will not collect on the insulators and cause a distortion of the electric field. As ionizing radiation enters the gas between the electrodes, a finite number of ion-pairs are formed. The behavior of the resultant ion-pairs is affected by the potential gradient of the electric field within the gas and the type and pressure of the fill gas. Under the influence of the electric field, the positive ions will move toward the negatively charged electrode (outer cylinder or plate), and the negative ions (electrons) will migrate toward the positive electrode (central wire or plate). The electric field in this region keeps the ions from recombining with the electrons. The collection of these ions will produce a charge on the electrodes and an electrical pulse across the detection circuit. In air, the average energy needed to produce an ion is about 34 eV, therefore a 1 MeV radiation completely absorbed in the detector produces about 3 x 104 pair of ions. However it is a small signal, this signal can be considerably amplified using standard electronics.  A current of 1 micro-ampere consists of about 1012 electrons per second.

Ionization chamber may be, for example, used for the measurement of tritium in the air.  These devices are known as tritium-in-air monitors. Tritium is a radioactive isotope, but it emits a very weak form of radiation, a low-energy beta particle that is similar to an electron. It is a pure beta emitter (i.e. beta emitter without an accompanying gamma radiation). The electron’s kinetic energy varies, with an average of 5.7 keV, while the remaining energy is carried off by the nearly undetectable electron antineutrino. Such a very low energy of electron causes, that the electron cannot penetrate the skin or even does not travel very far in air. Beta particles from tritium can penetrate only about 6.0 mm of air. It is practically impossible to design a detector whose walls these beta particles can penetrate. Instead, tritium-in-air monitor pumps the tritium-contaminated air right through an ionization chamber, so that all of the energy of the beta particles can be usefully converted to producing ion pairs inside the chamber.

Gamma rays have very little trouble in penetrating the metal walls of the chamber. Therefore, ionization chambers may be used to detect gamma radiation and X-rays collectively known as photons, and for this the windowless tube is used. Ionization chambers have a good uniform response to radiation over a wide range of energies and are the preferred means of measuring high levels of gamma radiation. Some problems are caused by the fact, that alpha particles are more ionising than beta particles and than gamma rays, so more current is produced in the ionization chamber region by alpha than beta and gamma. Gamma rays deposit significantly lower amount of energy to the detector than other particles.

The efficiency of the chamber can be further increased by the use of a high pressure gas. Typically a pressure of 8-10 atmospheres can be used, and various noble gases are employed. For example, high-pressure xenon (HPXe) ionization chambers are ideal for use in uncontrolled environments, as a detector’s response has been shown to be uniform over large temperature ranges (20–170°C). The higher pressure results in a greater gas density and thereby a greater chance of collision with the fill gas and ion-pair creation by incident gamma radiation. Because of the increased wall thickness required to withstand this high pressure, only gamma radiation can be detected. These detectors are used in survey meters and for environmental monitoring.

Since the neutrons are electrically neutral particles, they are mainly subject to strong nuclear forces but not to electric forces. Therefore neutrons are not directly ionizing and they have usually to be converted into charged particles before they can be detected. Generally every type of neutron detector must be equipped with converter (to convert neutron radiation to common detectable radiation) and one of the conventional radiation detectors (scintillation detector, gaseous detector, semiconductor detector, etc.).

We hope, this article, Ionization Chamber – Ion Chamber, helps you. If so, give us a like in the sidebar. Main purpose of this website is to help the public to learn some interesting and important information about radiation and dosimeters.