Skip to content
Internal conversion is an electromagnetic process, by which a nuclear excited state decays by the direct emission of one of its atomic electrons. Internal conversion competes with gamma emission. Radiation Dosimetry

Internal conversion is an electromagnetic process, by which a nuclear excited state decays by the direct emission of one of its atomic electrons. Internal conversion competes with gamma emission, but in this case the electromagnetic multipole fields of the nucleus do not result in the emission of a gamma ray, instead, the fields interact directly with atomic electrons. In contrast to beta decay, which is governed by a weak force, the electron is emitted from the radioactive atom, but not from the nucleus. For this reason, internal conversion is possible whenever gamma decay is possible, except in the case where the atom is fully ionised.

Note that, the high energy electrons resulting from internal conversion are not called beta particles, since the latter come from beta decay, where they are newly created in the nuclear decay process.

As can be seen, if a nucleus decays via internal conversion, atomic and mass numbers of daughter nucleus remain the same, but daughter nucleus will form different energy state of the same element. This is very similar to gamma decay, but in this case, there is no gamma ray emitted from an excited nucleus.

Since the process leaves a vacancy in the electron energy level from which the electron came, the outer electrons of the atom cascade down to fill the lower atomic levels, and one or more characteristic X-rays are usually emitted. Sometimes X-ray may interact with another orbital electron, which may be ejected from the atom. This second ejected electron is called an Auger electron. This is very similar to electron capture, but in case of electron capture, a nucleus changes its atomic number. As a result, the atom thus emits primary high energy electron, characteristic X-rays or secondary Auger electron, none of which originate in that nucleus.

In the quantum mechanical model of the electron, there is a finite probability of finding the electron within the nucleus. During the internal conversion process, the wavefunction of the K shell electron (inner shell electron) is said to penetrate the volume of the atomic nucleus. Note that, typical nuclear radii are of the order 10-14 m. In this case, the electron may couple to an excited nucleus and take the energy of the nuclear transition directly, without an intermediate gamma ray. Therefore, most internal conversion electrons (ICE) come from the K shell, as these electrons have the highest probability of being within the nucleus. However, the s states in the L, M, and N shells are also able to couple to the nuclear fields and cause ICE ejections from those shells.

The internal conversion electron (ICE) energy, is the transition energy, Etransition, minus the binding energy of the orbital electron, Eb.e., as:

For example, 203Hg is beta radioactive nuclide, which produces a continuous beta spectrum with maximum energy 214 keV. This decay produces an excited state of the daughter nucleus 203Tl, which then decays very quickly (~ 10-10 s) to its ground state emitting a gamma ray of energy 279.2 keV or an internal conversion electron. If we analyze a spectrum of beta particles, we can see the typical continuous spectrum of beta particles as well as narrow peaks at specific energies. These peaks are produced by internal conversion electrons (ICE). Since the binding energy of the K electrons in 203Tl amounts to 85.5 keV, the K line has an energy of:

Because of lesser binding energies, the L- and M-lines have higher energies. Since the internal conversion process can interact with any of the orbital electrons, the result is a spectrum of internal conversion electrons which will be seen as superimposed upon the electron energy spectrum of the beta emission. These relative intensities of these ICE peaks can give information about the electric multipole character of the nucleus and about the decay process. 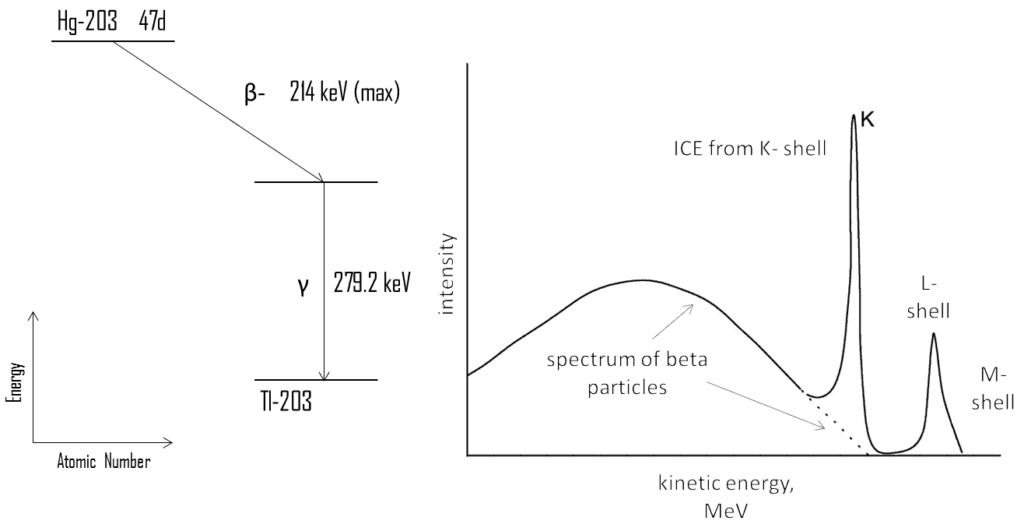 Using the Band-Raman Internal Conversion Coefficient calculator, the ICCs can be calculated using principles of atomic physics since it depends primarily on the density of the atomic electrons at the center of the nucleus. For increasing atomic number (Z) and decreasing gamma-ray energy, internal conversion coefficients are observed to increase.

We hope, this article, Internal Conversion, helps you. If so, give us a like in the sidebar. Main purpose of this website is to help the public to learn some interesting and important information about radiation and dosimeters.