Detection of neutrons is very specific, since the neutrons are electrically neutral particles, thus they are mainly subject to strong nuclear forces but not to electric forces. Therefore neutrons are not directly ionizing and they have usually to be converted into charged particles before they can be detected. Generally every type of neutron detector must be equipped with converter (to convert neutron radiation to common detectable radiation) and one of the conventional radiation detectors (scintillation detector, gaseous detector, semiconductor detector, etc.).

Two basic types of neutron interactions with matter are for this purpose available:

Thermal neutrons are neutrons in thermal equilibrium with a surrounding medium of temperature 290K (17 °C or 62 °F). Most probable energy at 17°C (62°F) for Maxwellian distribution is 0.025 eV (~2 km/s). This part of neutron’s energy spectrum constitutes most important part of spectrum in thermal reactors.

Thermal neutrons have a different and often much larger effective neutron absorption cross-section (fission or radiative capture) for a given nuclide than fast neutrons.

In general, there are many detection principles and many types of detectors. In nuclear reactors, gaseous ionization detectors are the most common, since they are very efficient, reliable and cover a wide range of neutron flux. Various types of gaseous ionization detectors constitute so called the excore nuclear instrumentation system (NIS). The excore nuclear instrumentation system monitors the power level of the reactor by detecting neutron leakage from the reactor core. 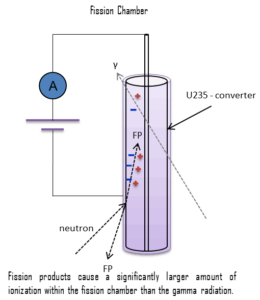 Fission chambers are ionization detectors used to detect neutrons. Fission chambers may be used as the intermediate range detectors to monitor neutron flux (reactor power) at the intermediate flux level. They also provide indication, alarms, and reactor trip signals. The design of this instrument is chosen to provide overlap between the source range channels and full span of the power range instruments.

In case of fission chambers, the chamber is coated with a thin layer of highly enriched uranium-235 to detect neutrons.  Neutrons are not directly ionizing and they have usually to be converted into charged particles before they can be detected. A thermal neutron will cause an atom of uranium-235 to fission, with the two fission fragments produced having a high kinetic energy and causing ionization of the argon gas within the detector. One advantage of using uranium-235 coating rather than boron-10 is that the fission fragments have a much higher energy than the alpha particle from a boron reaction. Therefore fission chambers are very sensitive to neutron flux and this allows the fission chambers to operate in higher gamma fields than an uncompensated ion chamber with boron lining.

Neutrons may be detected using activation foils and flux wires. This method is based on neutron activation, where an analyzed sample is first irradiated with neutrons to produce specific radionuclides. The radioactive decay of these produced radionuclides is specific for each element (nuclide). Each nuclide emits the characteristic gamma rays which are measured using gamma spectroscopy, where gamma rays detected at a particular energy are indicative of a specific radionuclide and determine concentrations of the elements.

Selected materials for activation foils are for example:

These elements have large cross sections for the radiative capture of neutrons. Use of multiple absorber samples allows characterization of the neutron energy spectrum. Activation also allows recreation of an historic neutron exposure.  Commercially available criticality accident dosimeters often utilize this method. By measuring the radioactivity of thin foils, we can determine the amount of neutrons to which the foils were exposed.

Flux wires may be used in nuclear reactors to measure reactor neutron flux profiles. Principles are the same. Wire or foil is inserted directly into the reactor core, remains in the core for the length of time required for activation to the desired level. After activation, the flux wire or foil is rapidly removed from the reactor core and the activity counted. Activated foils can also discriminate energy levels by placing a cover over the foil to filter out (absorb) certain energy level neutrons. For example, cadmium is widely used to absorb thermal neutrons in a thermal neutron filters.

In general, there are many detection principles and many types of detectors. Bu it must be added, detection of fast neutrons is very sophisticated discipline, since fast neutrons cross section are much smaller than in the energy range for slow neutrons. Fast neutrons are often detected by first moderating (slowing) them to thermal energies. However, during that process the information on the original energy of the neutron, its direction of travel, and the time of emission is lost.

The most important type of detectors for fast neutrons are those which directly detect recoil particles, in particular recoil protons resulting from elastic (n, p) scattering. In fact, only hydrogen and helium nuclei are light enough for practical application.  In the latter case the recoil particles are detected in a detector. Neutrons can transfer more energy to light nuclei. This method is appropriate for detecting fast neutrons allowing detection of fast neutrons without a moderator. This methods allows the energy of the neutron to be measured together with the neutron fluence, i.e. the detector can be used as a spectrometer. Typical fast neutron detectors are liquid scintillators, helium-4 based noble gas detectors and plastic detectors (scintillators). For example, the plastic has a high hydrogen content, therefore, it is useful for fast neutron detectors, when used as a scintillator.

There are several methods for detecting slow neutrons, and few methods for detecting fast neutrons. Therefore, one technique for measuring fast neutrons is to convert them to slow
neutrons, and then measure the slow neutrons. One of possible methods is based on Bonner spheres. The method was first described in 1960 by Ewing and Tom W. Bonner and employs thermal neutron detectors (usually inorganic scintillators such as 6LiI) embedded in moderating spheres of different sizes.  Bonner spheres have been used widely for the measurement of neutron spectra with neutron energies ranged from thermal up to at least 20 MeV. A Bonner sphere neutron spectrometer (BSS) consists of a thermal-neutron detector, a set polyethylene spherical shells and two optional lead shells of various sizes. In order to detect thermal neutrons a 3He detector or inorganic scintillators such as 6LiI can be used. LiGlass scintillators are very popular for detection of thermal neutrons. The advantage of LiGlass scintillators is their stability and their large range of sizes.

Scintillation counters can be used to detect alpha, beta, gamma radiation. They can be used also for detection of neutrons. For these purposes, different scintillators are used.

We hope, this article, Detection of Neutrons, helps you. If so, give us a like in the sidebar. Main purpose of this website is to help the public to learn some interesting and important information about radiation and dosimeters.