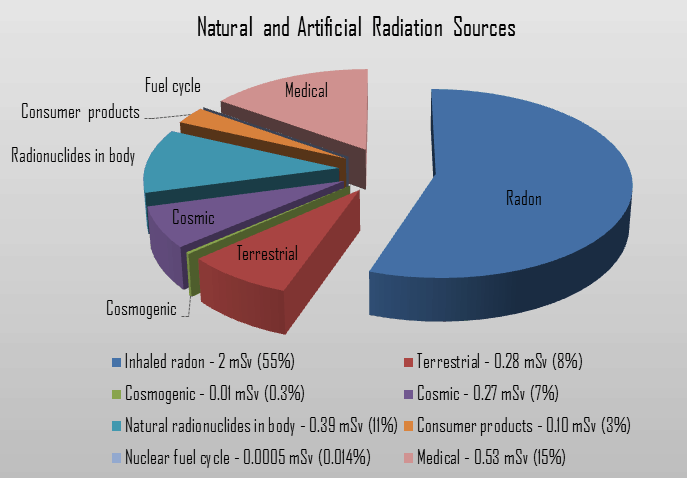 There are two broad categories of radiation sources:

Natural background radiation is ionizing radiation, that originates from a variety of natural sources. All living creatures, from the beginning of time, have been, and are still being, exposed to ionizing radiation. This radiation is not associated with any human activity.  There are radioactive isotopes in our bodies, houses, air, water and in the soil. We all are also exposed to radiation from outer space.

We divide all these natural radiation sources into three groups:

You can not go through life without radiation. The danger of ionizing radiation lies in the fact that the radiation is invisible and not directly detectable by human senses. People can neither see nor feel radiation, yet it deposits energy to the molecules of the body.

But don’t worry, the doses from background radiation are usually very small (except radon exposure). Low dose here means additional small doses comparable to the normal background radiation (10 µSv = average daily dose received from natural background). The problem is that, at very low doses, it is practically impossible to correlate any irradiation with certain biological effects. This is because the baseline cancer rate is already very high and the risk of developing cancer fluctuates 40% because of individual life style and environmental effects, obscuring the subtle effects of low-level radiation.

Secondly, and this is crucial, the truth about low-dose radiation health effects still needs to be found. It is not exactly known, whether these low doses of radiation are detrimental or beneficial (and where is the threshold).  Government and regulatory bodies assume a LNT model instead of a threshold or hormesis not because it is the more scientifically convincing, but because it is the more conservative estimate. Problem of this model is that it neglects a number of defence biological processes that may be crucial at low doses. The research during the last two decades is very interesting and show that small doses of radiation given at a low dose rate stimulate the defense mechanisms. Therefore the LNT model is not universally accepted with some proposing an adaptive dose–response relationship where low doses are protective and high doses are detrimental. Many studies have contradicted the LNT model and many of these have shown adaptive response to low dose radiation resulting in reduced mutations and cancers. This phenomenon is known as radiation hormesis.

We hope, this article, Background Radiation – Natural and Artificial, helps you. If so, give us a like in the sidebar. Main purpose of this website is to help the public to learn some interesting and important information about radiation and dosimeters.