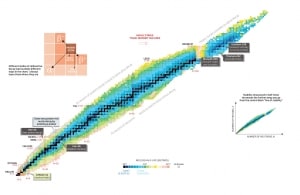 Atomic nuclei consist of protons and neutrons, which attract each other through the nuclear force, while protons repel each other via the electric force due to their positive charge. These two forces compete, leading to various stability of nuclei. There are only certain combinations of neutrons and protons, which forms stable nuclei.

Neutrons stabilize the nucleus, because they attract each other and protons , which helps offset the electrical repulsion between protons. As a result, as the number of protons increases, an increasing ratio of neutrons to protons is needed to form a stable nucleus. If there are too many or too few neutrons for a given number of protons, the resulting nucleus is not stable and it undergoes radioactive decay. Unstable isotopes decay through various radioactive decay pathways, most commonly alpha decay, beta decay, or electron capture. Many other rare types of decay, such as spontaneous fission or neutron emission are known. It should be noted that all of these decay pathways may be accompanied by the subsequent emission of gamma radiation. Pure alpha or beta decays are very rare.

Of the first 82 elements in the periodic table, 80 have isotopes considered to be stable. Technetium, promethium and all the elements with an atomic number over 82 are unstable and decompose through radioactive decay. No undiscovered heavy elements (with atomic number over 110) are expected to be stable, therefore lead is considered the heaviest stable element. For each of the 80 stable elements, the number of the stable isotopes is given. For example, tin has 10 such stable isotopes.

There are 80 elements with at least one stable isotope, but 114 to 118 chemical elements are known. All elements to element 98 are found in nature, and the remainder of the discovered elements are artificially produced, with isotopes all known to be highly radioactive with relatively short half-lives.

The nuclei of radioisotopes are unstable. In an attempt to reach a more stable arrangement of its neutrons and protons, the unstable nucleus will spontaneously decay to form a different nucleus. If the number of neutrons changes in the process (number of protons remains), a different isotopes is formed and an element remains (e.g. neutron emission). If the number of protons changes (different atomic number) in the process, then an atom of a different element is formed. This decomposition of the nucleus is referred to as radioactive decay. During radioactive decay an unstable nucleus spontaneosly and randomly decomposes to form a different nucleus (or a different energy state – gamma decay), giving off radiation in the form of atomic partices or high energy rays. This decay occurs at a constant, predictable rate that is referred to as half-life. A stable nucleus will not undergo this kind of decay and is thus non-radioactive.

We hope, this article, Nuclear Stability, helps you. If so, give us a like in the sidebar. Main purpose of this website is to help the public to learn some interesting and important information about radiation and dosimeters.