In general, pair production is a phenomenon of nature where energy is direct converted to matter. The phenomenon of pair production can be view two different ways. One way is as a particle and antiparticle and the other is as a particle and a hole. The first way can be represented by formation of electron and positron, from a packet of electromagnetic energy (high energy photon – gamma ray) traveling through matter.  It is one of the possible ways in which gamma rays interact with matter. At high energies this interaction dominates. In order for electron-positron pair production to occur, the electromagnetic energy of the photon must be above a threshold energy, which is equivalent to the rest mass of two electrons. The threshold energy (the total rest mass of produced particles) for electron-positron pair production is equal to 1.02MeV (2 x 0.511MeV) because the rest mass of a single electron is equivalent to 0.511MeV of energy.If the original photon’s energy is greater than 1.02MeV, any energy above 1.02MeV is according to the conservation law split between the kinetic energy of motion of the two particles.The presence of an electric field of a heavy atom such as lead or uranium is essential in order to satisfy conservation of momentum and energy. In order to satisfy both conservation of momentum and energy, the atomic nucleus must receive some momentum. Therefore a photon pair production in free space cannot occur.Moreover, the positron is the anti-particle of the electron, so when a positron comes to rest, it interacts with another electron, resulting in the annihilation of the both particles and the complete conversion of their rest mass back to pure energy (according to the E=mc2 formula) in the form of two oppositely directed 0.511 MeV gamma rays (photons). The pair production phenomenon is therefore connected with creation and destruction of matter in one reaction.

The probability of pair production, characterized by cross section, is a very complicated function based on quantum mechanics. In general the cross section increases approximately with the square of atomic number (σp ~ Z2) and increases with photon energy, but this dependence is much more complex. 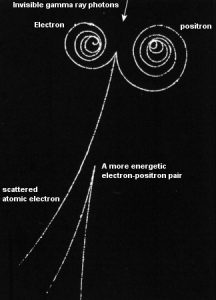 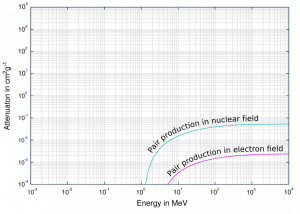 We hope, this article, Positron-Electron Pair Production, helps you. If so, give us a like in the sidebar. Main purpose of this website is to help the public to learn some interesting and important information about radiation and dosimeters.