Skip to content
Measurement of Radiation. Detailed knowledge about detection of radiation is very important in many branches of engineering, including radiation protection. Radiation Dosimetry

Detailed knowledge about detection of radiation is very important in many branches of engineering, including radiation protection. Most modern nuclear or particle experiments use a variety of sophisticated detectors for measuring and detection of sub-atomic particles. In order to be detected, a particle must leave some trace of its presence in a detector. Particles mostly deposit energy along its path. Knowledge of this interaction, how different particles deposit energy in the matter and how much energy particles deposit, is fundamental for our understanding of many problems. This chapter will give you a basic understanding of how these detectors work and some of their limitations. 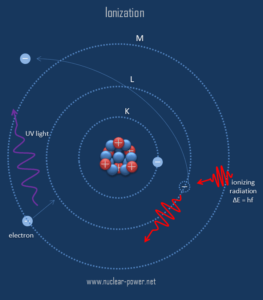 Ionization is the process in which an atom or a molecule gains or loses electrons to form charged ion. Ionization can result from the loss of an electron after collisions with energetic subatomic particles, collisions with other atoms, molecules and ions, or through the interaction with electromagnetic radiation. In general, ionizing radiation is any radiation (particles or electromagnetic waves) that carries enough energy to knock electrons from atoms or molecules, thereby ionizing them. For ionizing radiation, the kinetic energy of particles (photons, electrons, etc.) is sufficient and the particle can ionize (to form ion by losing electrons) target atoms to form ions.

The boundary between ionizing and non-ionizing radiation is not sharply defined, since different molecules and atoms ionize at different energies. Gamma rays, X-rays, and the higher ultraviolet part of the spectrum are ionizing, whereas the lower ultraviolet, visible light (including laser light), infrared, microwaves, and radio waves are considered non-ionizing radiation.

There are three main types of detectors, which record different types of signals.

All these types of equipment require that the radiations result in observable changes in a compound (whether gas, liquid or solid). In their basic principles of operation, most detectors of ionizing radiation follow similar characteristics. Detectors of ionizing radiation consist of two parts that are usually connected. The first part consists of a sensitive material, consisting of a compound that experiences changes when exposed to radiation. The other component is a device that converts these changes into measurable signals. All detectors require that radiation must deposit some of its energy in sensitive material that forms part of the instrument. The radiation enters the detector, interacts with atoms of the detector material and deposits some energy to sensitive material. Each event may generate a signal, which can be a pulse, hole, light signal, ion pairs in a gas, and many others. The main task is to generate sufficient signal, amplify it and to record it.

Let assume gaseous ionization detectors. Basic gaseous ionization detector consists of a chamber that is filled with a suitable medium (air or a special fill gas) that can be easily ionized. As a general rule, the center wire is the positive electrode (anode) and the outer cylinder is the negative electrode (cathode), so that (negative) electrons are attracted to the center wire and positive ions are attracted to the outer cylinder. The anode is at a positive voltage with respect to the detector wall. As ionizing radiation enters the gas between the electrodes, a finite number of ion-pairs are formed. Under the influence of the electric field, the positive ions will move toward the negatively charged electrode (outer cylinder), and the negative ions (electrons) will migrate toward the positive electrode (central wire). The collection of these ions will produce a charge on the electrodes and an electrical pulse across the detection circuit. However it is a small signal, this signal can be amplified, and then recorded using standard electronics.

We hope, this article, Measurement of Radiation, helps you. If so, give us a like in the sidebar. Main purpose of this website is to help the public to learn some interesting and important information about radiation and dosimeters.