Facebook Instagram Youtube Twitter
Skip to content
Absorbed dose is defined as the amount of energy deposited by ionizing radiation in a substance. Absorbed dose is given the symbol D.  The absorbed dose is usually measured in a unit called the gray (Gy), which is derived from the SI system. Radiation Dosimetry

Absorbed dose is defined as the amount of energy deposited by ionizing radiation in a substance. Absorbed dose is given the symbol D.  The absorbed dose is usually measured in a unit called the gray (Gy), which is derived from the SI system. The non-SI unit rad is sometimes also used, predominantly in the USA. 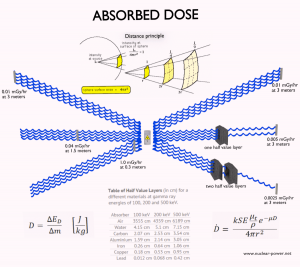 Why we deal with a radiation dose? In previous chapters, we have discussed radioactivity and the intensity of a radioactive source, measured usually in becquerels. But any radioactive source represents no biological risk as long as it is isolated from the environments. However, when people or another system (also non-biological) are exposed to radiation, energy is deposited in the material and radiation dose is delivered.

In nuclear power plants the central problem is to protect personal and the environment against gamma rays and neutrons, because the ranges of charged particles (such as beta particles and alpha particles) in matter are very short. On the other hand we must deal with shielding of all types of radiation, because each nuclear reactor is a significant source of all types of ionizing radiation.

In conventional units, it is measured in mrad/sec, rad/hr, mGy/sec or Gy/hr. Since the amount of radiation exposure depends directly (linearly) on the time people spend near the source of radiation, the absorbed dose is equal to the strength of the radiation field (dose rate) multiplied by the length of time spent in that field. The example above indicates a person could expect to receive a dose of 25 millirems by staying in a 50 millirems/hour field for thirty minutes.

Determine the primary photon dose rate, in gray per hour (Gy.h-1), at the outer surface of a 5 cm thick lead shield. Primary photon dose rate neglects all secondary particles. Assume that the effective distance of the source from the dose point is 10 cm. We shall also assume that the dose point is soft tissue and it can reasonably be simulated by water and we use the mass energy absorption coefficient for water.

As was written, each type of radiation interacts with matter in a different way. For example charged particles with high energies can directly ionize atoms. On the other hand electrically neutral particles interacts only indirectly, but can also transfer some or all of their energies to the matter. It would certainly simplify matters if biological effects of radiation were directly proportional to the absorbed dose. Unfortunately, biological effects depend also on the way in which the absorbed dose is distributed along the path of the radiation. Studies have shown that alpha and neutron radiation cause greater biological damage for a given energy deposition per kg of tissue than gamma radiation does. It was discovered, biological effects of any radiation increases with the linear energy transfer (LET). In short, the biological damage from high-LET radiation (alpha particles, protons or neutrons) is much greater than that from low-LET radiation (gamma rays). This is because the living tissue can more easily repair damage from radiation that is spread over a large area than that which is concentrated in a small area. Because more biological damage is caused for the same physical dose (i.e., the same energy deposited per unit mass of tissue), one gray of alpha or neutron radiation is more harmful than one gray of gamma radiation. This fact that radiations of different types (and energies) give different biological effects for the same absorbed dose is described in terms of factors known as the relative biological effectiveness (RBE) and the radiation weighting factor (wR).

We hope, this article, Absorbed Dose, helps you. If so, give us a like in the sidebar. Main purpose of this website is to help the public to learn some interesting and important information about radiation and dosimeters.