A whole-body counter is an instrument that measures the amounts of gamma-emitting radionuclides in the body (i.e. it is a gamma spectrometer). In nuclear facilities, these counters are used for measurement of radioactivity within the human body, that means, for internal contamination measurements. This must not be confused with a “whole body monitor” which used for personnel exit monitoring, which is the term used in radiation protection for checking for external contamination of a whole body of a person leaving a radioactive contamination controlled area. Whole-body counters are very sensitive devices and therefore they are often surrounded by large quantities of lead shielding to reduce the background radiation. A whole-body counter consists, for example, of a stand-up booth with two large-area NaI scintillation detectors. The upper detector monitors lungs, the lower detector monitors the gastrointestinal tract.

It must be noted, all people also have some radioactive isotopes inside their bodies from birth. These isotopes are especially potassium-40, carbon-14 and also the isotopes of uranium and thorium. The average annual radiation dose to a person from internal radioactive materials other than radon is about 0.3 mSv/year of which:

The variation in radiation dose from one person to another is not as great, but it is detected also by a whole-body counter.

If a gamma ray is emitted from a radioactive element within the human body due to radioactive decay, and its energy is sufficient to escape then it can be detected. This would be by means of gamma spectrometer. Spectroscopes, or spectrometers, are sophisticated devices designed to measure the spectral power distribution of a source. The incident radiation generates a signal that allows to determine the energy of the incident particle. Most radioactive sources produce gamma rays, which are of various energies and intensities. Gamma rays frequently accompany the emission of alpha and beta radiation. When these emissions are detected and analyzed with a spectroscopy system, a gamma-ray energy spectrum can be produced. Gamma rays from radioactive decay are in the energy range from a few keV to ~8 MeV, corresponding to the typical energy levels in nuclei with reasonably long lifetimes. As was written, they are produced by the decay of nuclei as they transition from a high energy state to a lower state. A detailed analysis of this spectrum is typically used to determine the identity and quantity of gamma emitters present in a sample, and is a vital tool in radiometric assay. The gamma spectrum is characteristic of the gamma-emitting nuclides contained in the source.

For the measurement of gamma rays above several hundred keV, there are two detector categories of major importance, inorganic scintillators as NaI(Tl) and semiconductor detectors. In the previous articles, we described the gamma spectroscopy using scintillation detector, which consists of a suitable scintillator crystal, a photomultiplier tube, and a circuit for measuring the height of the pulses produced by the photomultiplier. The advantages of a scintillation counter are its efficiency (large size and high density) and the high precision and counting rates that are possible. Due to the high atomic number of iodine, a large number of all interactions will result in complete absorption of gamma-ray energy, so the photo fraction will be high.

But if a perfect energy resolution is required, we have to use germanium-based detector, such as the HPGe detector. Germanium-based semiconductor detectors are most commonly used where a very good energy resolution is required, especially for gamma spectroscopy, as well as x-ray spectroscopy. In gamma spectroscopy, germanium is preferred due to its atomic number being much higher than silicon and which increases the probability of gamma ray interaction. Moreover, germanium has lower average energy necessary to create an electron-hole pair, which is 3.6 eV for silicon and 2.9 eV for germanium. This also provides the latter a better resolution in energy. The FWHM (full width at half maximum) for germanium detectors is a function of energy. For a 1.3 MeV photon, the FWHM is 2.1 keV, which is very low.

If the source of radiation is inside our body, we say, it is internal exposure. The intake of radioactive material can occur through various pathways such as ingestion of radioactive contamination in food or liquids, inhalation of radioactive gases, or through intact or wounded skin. Most radionuclides will give you much more radiation dose if they can somehow enter your body, than they would if they remained outside. For internal doses, we first should distinguish between intake and uptake. Intake means what a person takes in. Uptake means what a person keeps. 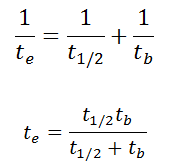 For tritium, the annual limit intake (ALI) is 1 x 109 Bq. If you take in 1 x 109 Bq of tritium, you will receive a whole-body dose of 20 mSv. The committed effective dose, E(t), is therefore 20 mSv. It does not depend whether a person intakes this amount of activity in a short time or in a long time. In every case, this person gets the same whole-body dose of 20 mSv.

We hope, this article, Whole-Body Counter – Whole-Body Counting, helps you. If so, give us a like in the sidebar. Main purpose of this website is to help the public to learn some interesting and important information about radiation and dosimeters.