As can be seen, effective shielding of X-rays is in most cases based on use of materials with two following material properties:

In general, the X-rays shielding is more complex and difficult than the alpha or beta radiation shielding. In order to understand comprehensively the way how a X-ray loses its initial energy, how can be attenuated and how can be shielded we must have detailed knowledge of the its interaction mechanisms. 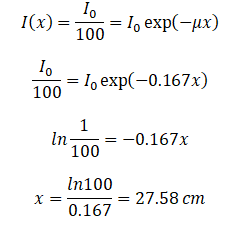 Table of Half Value Layers

We hope, this article, Shielding of X-rays, helps you. If so, give us a like in the sidebar. Main purpose of this website is to help the public to learn some interesting and important information about radiation and dosimeters.