Skip to content
Proton decay is a rare type of radioactive decay of nuclei containing excess protons, in which a proton is simply ejected from the nucleus. Radiation Dosimetry

Proton decay is a rare type of radioactive decay of nuclei containing excess protons, in which a proton is simply ejected from the nucleus. This article describes mainly spontaneous proton emission (proton decay) and does not describe decay of a free proton. Note that, a free proton (a proton not bound to nucleons or electrons) is a stable particle that has not been observed to break down spontaneously to other particles. 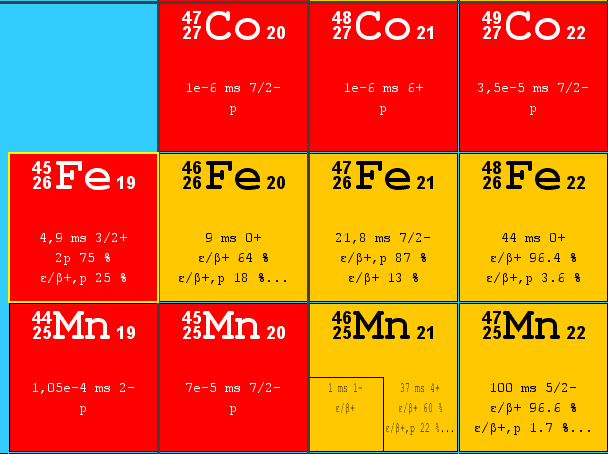 The mechanism of the decay process is very similar to alpha decay. Proton decay is also a quantum tunneling process. In order to be emitted, the proton must penetrate a potential barrier. For a proton to escape a nucleus, the proton separation energy must be negative – the proton is therefore unbound, and tunnels out of the nucleus in a finite time. Some nuclei decay via double proton emission, such as 45Fe.

If a nucleus decays via proton emission, atomic and mass numbers change by one and a daughter nucleus becomes a different element. Nuclei which can decay by this mode are described as lying highly above the neutron drip line. Proton emission is not seen in naturally occurring isotopes. Proton radioactive isotopes can be produced via nuclear reactions, usually using particle accelerators.

We hope, this article, Proton Decay – Proton Emission, helps you. If so, give us a like in the sidebar. Main purpose of this website is to help the public to learn some interesting and important information about radiation and dosimeters.