Skip to content
The neptunium series is a radioactive series beginning with neptunium-237. Its members are produced artificially by nuclear reactions due to the short half-life of neptunium-237. Radiation Dosimetry 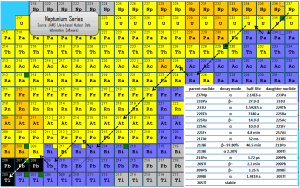 The neptunium series is a radioactive series beginning with neptunium-237. Its members are produced artificially by nuclear reactions and do not occur naturally, because the half-life of the longest lived isotope in the series is short compared to the age of the earth. This radioactive decay chain consists of unstable heavy atomic nuclei that decay through a sequence of alpha and beta decays until a stable nucleus is achieved. In case of neptunium series, the stable nucleus is bismuth-209 (with half-life of 1.9E19 years) and thallium-205.

Since alpha decay represents the disintegration of a parent nucleus to a daughter through the emission of the nucleus of a helium atom (which contains four nucleons), there are only four decay series. Within each series, therefore, the mass number of the members may be expressed as four times an appropriate integer (n) plus the constant for that series. As a result, the neptunium series is known as the 4n+1 series.

The total energy released from neptunium-237 to thallium-205, including the energy lost to neutrinos, is 50.0 MeV.

In some kind of smoke detectors, you can meet radionuclides from this series. Ionization smoke detectors usually use a radioisotope, typically americium-241, to ionize air and to detect smoke. In this case americium-241 decays to neptunium-237 and is, in fact, a member of neptunium series.

Types of Decay in Neptunium Series

We hope, this article, Neptunium Series, helps you. If so, give us a like in the sidebar. Main purpose of this website is to help the public to learn some interesting and important information about radiation and dosimeters.