A proportional counter, also known as the proportional detector, is an electrical device that detects various types of ionizing radiation. The voltage of detector is adjusted so that the conditions correspond to the proportional region. In this region, the voltage is high enough to provide the primary electrons with sufficient acceleration and energy so that they can ionize additional atoms of the medium. These secondary ions (gas amplification) formed are also accelerated causing an effect known as Townsend avalanches, which creates a single large electrical pulse. Gaseous proportional counters usually operate in high electric fields of the order of 10 kV/cm and achieve typical amplification factors of about 105. Since the amplification factor is strongly dependent on the applied voltage, the charge collected (output signal) is also dependent on the applied voltage and proportional counters require constant voltage. 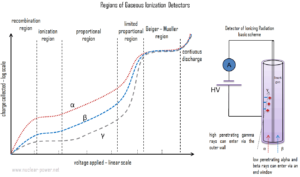 A multi-wire proportional chamber is a type of proportional counter used especially in high energy particle physics to detect charged particles and photons and can give positional information on their trajectory. This device was developed by Georges Charpak and his collaborators. This invention resulted in him winning the Nobel Prize for Physics in 1992. The multi-wire chamber uses an array of wires at high voltage (anode), which run through a chamber with conductive walls held at ground potential (cathode).  The principle is to have a plane of anode wires positioned precisely, with typical wire-spacings of about 2 mm. By computing pulses from all the wires, the particle trajectory can be found.

We hope, this article, Multi-wire Proportional Chamber – MWPC, helps you. If so, give us a like in the sidebar. Main purpose of this website is to help the public to learn some interesting and important information about radiation and dosimeters.