Depending on the gamma ray energy and the absorber material, one of the three partial cross-sections may become much larger than the other two. At small values of gamma ray energy the photoelectric effect dominates. Compton scattering dominates at intermediate energies. The compton scattering also increases with decreasing atomic number of matter, therefore the interval of domination is wider for light nuclei. Finally, electron-positron pair production dominates at high energies.Based on the definition of interaction cross-section, the dependence of gamma rays intensity on thickness of absorber material can be derive. If monoenergetic gamma rays are collimated into a narrow beam and if the detector behind the material only detects the gamma rays that passed through that material without any kind of interaction with this material, then the dependence should be simple exponential attenuation of gamma rays. Each of these interactions removes the photon from the beam either by absorbtion or by scattering away from the detector direction. Therefore the interactions can be characterized by a fixed probability of occurance per unit path length in the absorber. The sum of these probabilities is called the linear attenuation coefficient:

The attenuation of gamma radiation can be then described by the following equation. 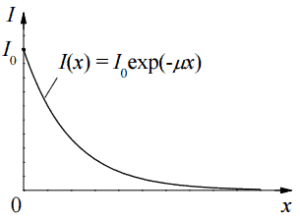 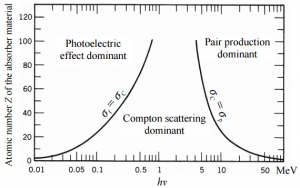 Table of Linear Attenuation Coefficients (in cm-1) for a different materials at gamma ray energies of 100, 200 and 500 keV.

We hope, this article, Linear Attenuation Coefficient, helps you. If so, give us a like in the sidebar. Main purpose of this website is to help the public to learn some interesting and important information about radiation and dosimeters.