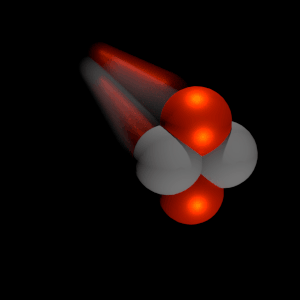 Detection of alpha radiation is very specific, because alpha particles travel only a few centimeters in air but deposit all their energies along their short paths, thus the amount of energy transferred is very high.

The distance required to bring the particle to rest is referred to as its range. The range of heavy charged particles in solids amounts to only a few microns, and thus most of the energy of these particles is converted to heat very close to the point of its creation. In case of gases the range increases to a few centimeters in dependence of gas parameters (density, type of gas etc.)  This distance is very important for detectors and significantly determines the design of all detectors. In the materials, the trajectory of heavy charged particles are not greatly affected, because they mostly interact with light atomic electrons. Other charged particles, such as the protons behave similarly with one exception – for lighter charged particles the ranges are somewhat longer.

Detectors may be also categorized according to sensitive materials and methods that can be utilized to make a measurement:

Geiger counters are mainly used for portable instrumentation due to its sensitivity, simple counting circuit, and ability to detect low-level radiation. Although the major use of Geiger counters is probably in individual particle detection, they are also found in gamma survey meters. They are able to detect almost all types of radiation, but there are slight differences in the Geiger-Mueller tube. However, the Geiger-Müller tube produces a pulse output which is the same magnitude for all detected radiation, so a Geiger counter with an end window tube cannot distinguish between alpha and beta particles.

For alpha and beta particles to be detected by Geiger counters, they must be provided with a thin window. This “end-window” must be thin enough for the alpha and beta particles to penetrate. However, a window of almost any thickness will prevent an alpha particle from entering the chamber. The window is usually made of mica with a density of about 1.5 – 2.0 mg/cm2 to allow low-energy beta particles (e.g. from carbon-14) to enter the detector. The efficiency reduction for alpha is due to the attenuation effect of the end window, though distance from the surface being checked also has a significant effect, and ideally a source of alpha radiation should be less than 10mm from the detector due to attenuation in air.

Scintillation counters can be used to detect alpha, beta, gamma radiation. They can be used also for detection of neutrons. For these purposes, different scintillators are used:

Alpha Particles and Heavy Ions. Due to the very high ionizing power of heavy ions, scintillation counters are usually not ideal for the detection of heavy ions. For equal energies, a proton will produce 1/4 to 1/2 the light of an electron, while alpha particles will produce only about 1/10 the light. Where needed, inorganic crystals, e.g. CsI(Tl), ZnS(Ag) (typically used in thin sheets as α-particle monitors), should be preferred to organic materials. Pure CsI is a fast and dense scintillating material with relatively low light yield that increases significantly with cooling. The drawbacks of CsI are a high temperature gradient and a slight hygroscopicity.

Silicon-based detectors are very good for tracking charged particles. A silicon strip detector is an arrangement of strip like shaped implants acting as charge collecting electrodes.

Silicon strip detectors 5 x 5 cm2 in area are quite common and are used in series (just like planes of MWPCs) to determine charged-particle trajectories to position-accuracies of the order of several μm in the transverse direction.  Placed on a low doped fully depleted silicon wafer these implants form a one-dimensional array of diodes. By connecting each of the metalized strips to a charge sensitive amplifier a position sensitive detector is built. Two dimensional position measurements can be achieved by applying an additional strip like doping on the wafer backside by use of a double sided technology.  Such devices can be used to measure small impact parameters and thereby determine whether some charged particle originated from a primary collision or was the decay product of a primary particle that traveled a small distance from the original interaction, and then decayed.

We hope, this article, Detection of Alpha Radiation – Alpha Particle Detector, helps you. If so, give us a like in the sidebar. Main purpose of this website is to help the public to learn some interesting and important information about radiation and dosimeters.